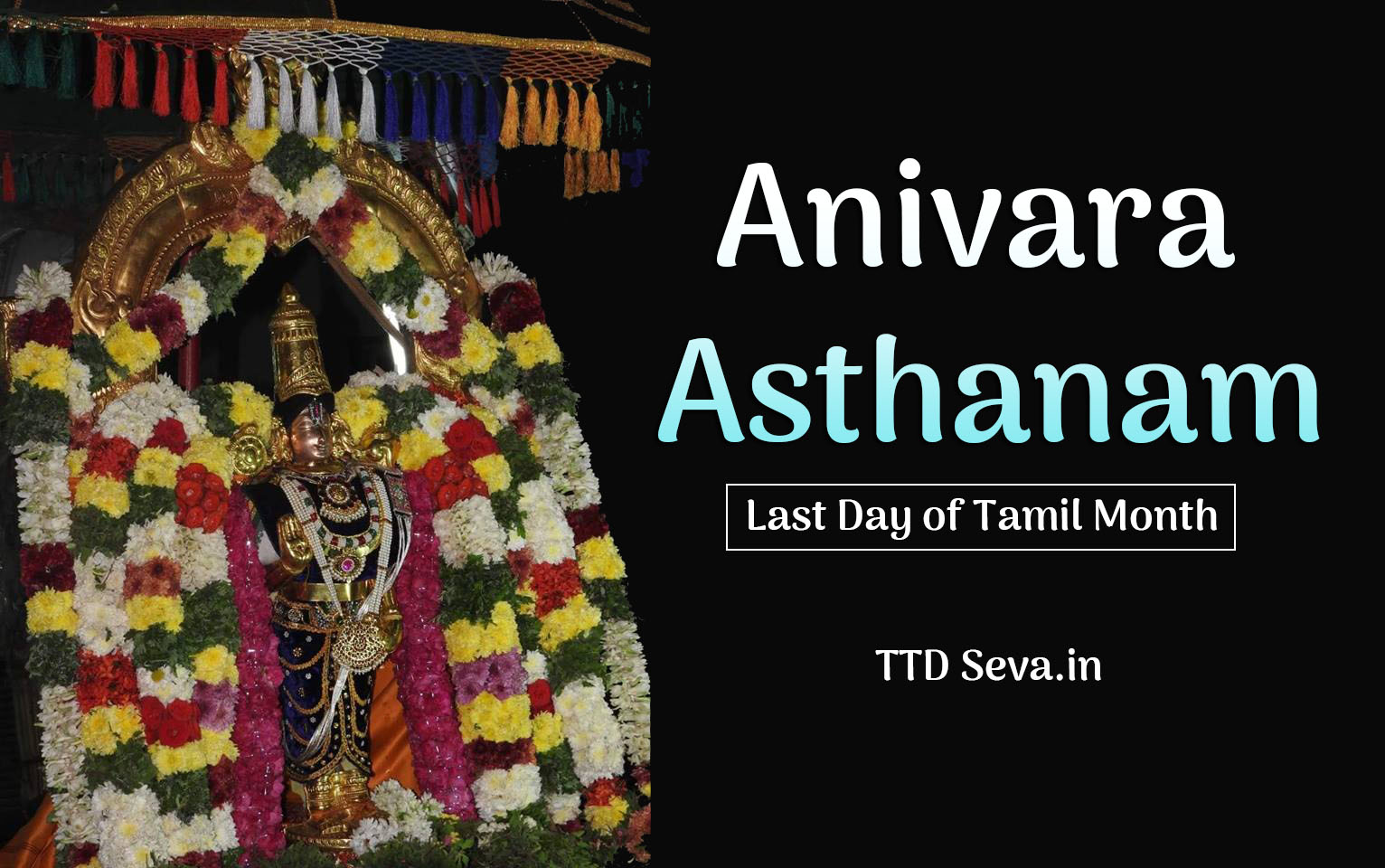 A durbar will be held in front of Bangaru Vakili with processional deity of Sri Venkateswara with his two consorts – Sridevi and Bhudevi, along with Sri Senadhipativaru. In olden days this festival used to mark the commencement of writing of the new accounts. An inscription (No.617 T.T) Anivara Asthanam found on the stone wall of the second prakara of Tirumala temple under date 9-3-1494 pertains to an endowment made by two accountants of the temple for offering of certain atirasapadis on the occasion.

What Anivara Asthanam, one may be inclined to ask. The Anivara Asthanam is a traditional function which marks the closure of the year’s account and the commencement of accounts for the coming year and taking over of charge officially.

In olden days, in the history of Tirumala, this celebration is called Adi Ayanam Asthanam, the writing up of the New Year accounts. It is well known how the Adi Ayanam Asthanam has come to be known as Anivara Asthanam. Perhaps it may be due to the fact that the function is held on the last of the Tamil month of Ani. In one of the inscriptions on the walls of the temple, there is a stipulation as to how the charitable endowment should be utilized for the said purpose.

On this occasion Anivara Asthanam, the Lord Sri Venkateswara is adorned with rare jewelers such as Makarakanti, and Lakshmi Haram. The processional deity with His two consorts is taken to the Mukha Mantapam and a grand Durbar is held after the daily Thomala, archana and naivedya are all over for the moolabera. The processional deity as stated before proceeds to the Bangaru Vakili in the Ani Asthanam.

Sri Senadhipati is also brought to the mantapam but seated separately on the left side of Sri Malayappa Swamy. After this Durbar in the Tirumamani Mantapam on the Sarva Bhupala Vahanam, the archakas offer worship and after this, the procession starts from parimala room carrying six vastrams in silver plate. This procession goes round the Dwajasthambha and the Vimana – pradakshina and then into the sanctum sanctorum.

On this occasion, the temple is re-entrusted to the jeeyangars, as also the seals of the office of the Administration to the Executive and administrative heads of the Devasthanams. This festival also signifies the oath taking ceremony, at which the servants of the Lord are to affirm their loyalty and faithfulness to their duty in scared service of Lord.

In short, the Asthanam summarizes for us the philosophical and ethical teachings of the Upanishads, the crux of the Vedanta.

On this day evening Sri Malayappa swamy will be taken out in procession on an exquisite palanquin, daintily decorated with colorful flowers.

The Sun God moves from north to south on the day of Anivara Asthanam i.e. the starting day of dakshinayam.