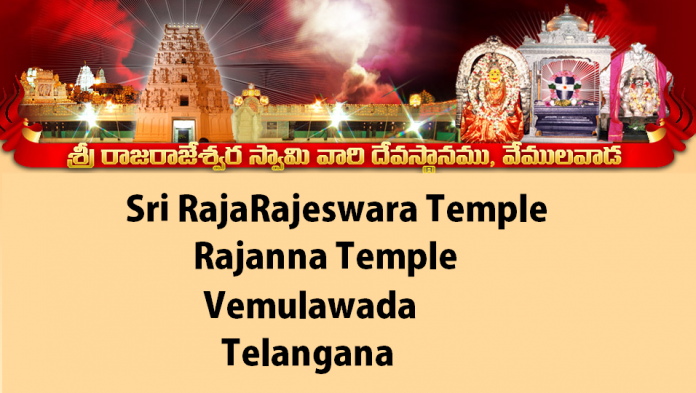 Sri Raja Rajeshwara Swamy Temple was built during 750 to 973AD by Raja Narendra grandson of Parikshit. on mahashiva ratri special occasion Vemulawada temple overflows with devotees. It was built by one of the governors of Kalyani Chalukyas by name Rajadithya between 11th and 12th centuries. The presiding deity is locally popular as Rajanna who is accompanied by the idols of Sri Raja Rajeswari Devi and Siddi Vinayaka. It houses several temples dedicated to other deities including Anantha Padmanabha Swamy, Bhimeshwara Swamy, Kodanda Rama and Kasi Visweswara. Apart from these there is a tomb of Muslim saint.

Vemulawada Raja rajeswara temple is situated 38 km from Karimnagar. Vemulawada is Famous holy shrine in India Attracting thousands of pilgrims from every nook and corner of the country. Though the temple was established in 14th Century, it was improved considerably in both income and pilgrims. This famous temple dedicated to Lord Rajarajeswara Swamy, draws pilgrims in large numbers. on maha Shivaratri special occasion devotees in large numbers flock to Vemulawada, to offer prayers to Lord Shiva. This temple also has a very special offering made by devotees called’ Koda Mokku’. During Sravana Masam and Karthika Masam, the temple attracts large crowd.

Vemulawada Kode Mrokkubadi: Lord Shiva temple, on occasion of Mahashiva ratri unique worship and found only in this temple throughout length and breadth of the country and takes precedence over other rituals / Pujas. Devotees offer Kode Mrokkubadi to Lord Raja Rajeshwara for progeny and well being of their family.

The distance between Karimnagar town and Vemulawada is 35 Kilometers and the temple is well accessible by road. Frequent Bus services are available from Hyderabad which is 150km away and Karimnagar which is 34km away to Sri Raja Rajeshwara Swamy Temple.

Providing Accommodation to the visiting pilgrims at affordable rent in Devasthanam choultries & in Dormitory Type Halls. Provided more services Running Devasthanam buses local trips from Vemulawada to Sircilla and back covering Korutla and Thippapur Bus Stations [reaching points to Vemulawada] and Agraharam Temple, for the convenience of the visiting pilgrims on nominal charges. In this shrine, Pujas / Rituals are performed according to Smartha Agama and however, in Vaisnavate temples located in temple complex, Pujas / rituals are performed according to Pancharathra Agama.

On Occasion special day Mahashivaratri is one of the popular temple and notified festival in this Devasthanam. Lakhs of pilgrims from all corners of the State and from other States also visit this shrine during the Maha shiva ratri Jathara and offer their vows to Lord Raja Rajeshwara. On Mahasivarathri festival day, Maha Lingarchana & Lingodbhavakala Mahanyasa Purvaka Eakadasa Rudrabhisekam would be performed in a befitting manner.

Other temples in the area include: