Srivari Annual Brahmotsavam: The Lord as Kalki on the aswa vehicle signified the completion of Eight-day vahana sevas during nine-day brahmotsavams. The Kalki avatar of Lord Venkateswara is hailed as the most significant in the celestial lore’s of Malayappa. The Horse (Aswa) is described as the only living witness to the first meeting of Venkateswara and his consort Padmavati, their romance and finally culmination in love and wedding. The nine days Brahmotsavam held in ekantham  inside Srivari temple due to Covid-19 restrictions concluded with the Procession of Sri Malayappa swamy entourage on the Bangaru Tiruchi vahanam along the Vimana prakaram and Asthanam at Ranganayakula Mandapam.

The Krishna Yajurveda described Almighty as a ‘Ashwa rupa“. Thus the Aswa Vahanam of Lord Venkateswara is denoted as a message for every one to distance from Kali-dosha’s and observe continuous pray and sing the keertans to ward off the impact of wrong doings.

On the final day of Srivari Brahmotsavam, Friday Snapana thirumanjanam and chakra snanam is performed at the Ayina mahal in the morning between 08.00- 11.00am.Later in the evening Bangaru Tiruchi procession followed by Dwajavarohanam will be observed inside the Srivari temple.

Annual Jyestabhishekam: The annual Jyestabhishekam otherwise known as Abhidyeyaka Abishekam was concluded on a grand religious note in Tirumala temple on Thursday. Archaka swamis rendered Snapanam to the deities amidst chanting of Vedic hymns and conducted Homam afterwards. Later Puja was conducted to Swarna Kavacham before they were decorated to the deities. After Sahasra Deepalankara Seva the deities were taken on a celestial procession along four mada streets to bless devotees. 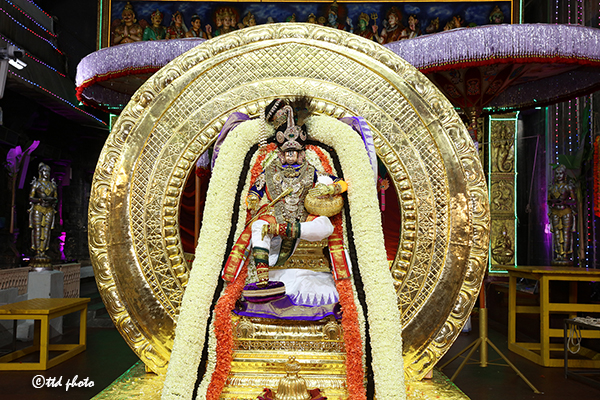 Second day: On the second day evening of the ongoing Srivari annual Brahmotsavam at Tirumala, Sri Malayappa graced His devotees on Hamsa Vahana in Saraswati Devi Alankara. Hamsa is a vehicle of Brahma and symbolic of wisdom while Saraswati Devi is the Goddess of Knowledge.

By riding the Hamsa carrier, Sri Malayappa indicated that devotees should give up ego and achieve wisdom to get Mukti in life.

Third Day: On the occasion of Anivara Asthanam, Pushpa Pallaki Seva took place with utmost religious fervour in Tirumala on Friday evening along the four Mada streets between 6pm and 7pm. On the third day of the ongoing annual float festival of the Srivari temple, the utsava idols of Sri Malayappa and His consorts Sridevi and Bhudevi took the majestic float ride on the fresh and serene waters of Swami Pushkarini in total adherence to COVID-19 guidelines.

On the colourfully decorated float with flowers and electrical lighting, the deities went three rounds and enthralled the devotees. TTD organised Veda Gosha by pundits, Mangala vaidyam and sankeetans by the artists of Annamacharya project at Swami Pushkarini on the celestial occasion. Decorated with dazzling jewels, colourful silk vastrams, flanked by Sridevi and Bhudevi, Sri Malayappa Swamy took out a celestial ride to bless the devotees on this finely decked floral palanquin.

Varieties of flowers weighing about one ton are used to create this colourful palanquin by 15 florists for three days. The palanquin carried the images of Sri Rama, Sri Krishna and Balanjaneya Swamy which stood as a special attraction.

Fourth Day: On the fourth day of ongoing Srivari annual Brahmotsavams, Sri Malayappa blessed devotees in Rajamannar Alankaram on the Kalpavruksha Vahana. In view of Covid regulations, Sri Malayappa was seated along with his consorts on the richly decked vahana at Kalyanotsava Mandapam inside Srivari temple on Sunday morning. On the fourth day evening, Sri Malayappa Swamy took out five rounds on the finely decorated float on Saturday along with His two consorts Sridevi and Bhudevi. The float festival will conclude on Sunday evening on the auspicious Phalguna Pournami day.  On the fifth day of Srivari Navaratri Brahmotsavam Tuesday Sri Malayappa blessed devotees on Garuda vahanam.

In view of Covid-19 restrictions the utsava idol of Sri Malayappa Swamy mounted atop the bejewelled golden Garuda Vahanam was held in ekantham within the temple complex.

The pushpaka Vikamanam is a fete observed in Srivari temple once in three-year mode on the occasion of the Adhika Masam Navaratri Brahmotsavams. The Pushpaka vimanam vahana seva is conducted inside Srivari temple for Sri Malayappa swami and his consorts to take a breather after a busy schedule of events like Snapana’s and vahana sevas etc.

The 15×14 feet Vimanam weighing 750 kgs is made out of coconut leafs and decorated with 150 kgs of traditional flowers like jasmine, marigold, Kanaka, Abram, Lily, roses and scented leafs, The vimanam is decked with idols of Anjaneya and Garuda on both sides. The Idols of Asta Lakshmi are in the middle and in the second layer has elephants, parrots. Finally the hooded servants embellish the Vimanam.

Hanumanta vahanam is usually considered as an icon of devotional bliss. Lord Hanuman symbolically stands for pure devotion, complete surrender and absence of ego. His character tells us what we can do in our lives by becoming pure. Hanuman represents the tenets of devotion and Sharanagathi in its both physical mans intellectual form. Sri Malayappa Swamy by riding Hanumantha Vahana sent message to His devotees that he is always blessed people who were humble and surrendered to him.

Seventh Day: On the evening of seventh day of Srivari Navaratri Brahmotsavams Sri Malayappa Swamy blessed devotees from celestial ride on Chandra Prabha Vahanam in Navateeta Krishna Alankaram. The TTD is conducting all events of the Navaratri Brahmotsavam in Ekantham as per Covid guidelines issued by State and central governments for the festive season. 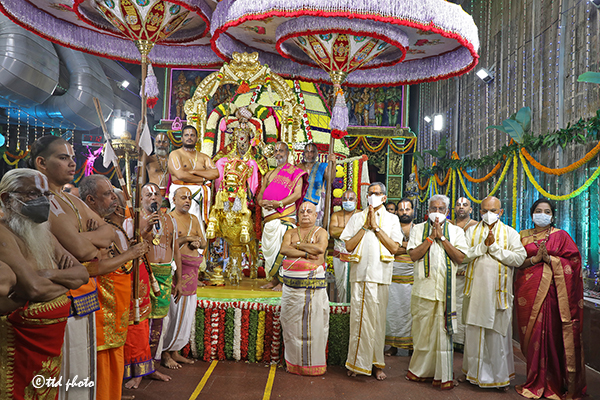 Legends say that Chandra or the moon stands for highlighting medicinal values in all living beings including plants. Chandra is described as Lord Vishnu, the invisible architect who found remedies for all ailments of persons and plants.  The Bhagavat Geeta also mentions “Nakshatrana Aham Shashi” (I am the moon in the constellation) as the Lord referred Himself to Moon. The Chandra Prabha Vahanam signifies that its very sight will provide soothing relief to devotees from physical and mental worries.

Eighth Day: On the evening of Day-8 Friday of Srivari Navaratri Brahmotsvams, Sri Malayappa Swamy along with His consorts Sridevi and Bhudevi blessed devotees on Sarvabhoopala Vahanam. As part of the state and central government Covid-19 guidelines, the vahana was observed in ekantham and the utsava idols were seated atop the richly decorated Sarvabhoopala vahana at the Kalyana Mandapam inside Srivari temple.

Sarvabhoopala means that Lord was the Supreme Commander of the entire cosmos. The message spelled out of this Vahanam indicates that Lord Venkateswara controlled the entire universe as the controller of all On His instructions Indra (East), Agni (south-east), Yama (god of death on the South), Niruti (North – East), and Varuna on (West), Vayu (south-west) and Kubera (god of wealth on North) and Parameswara on (North-west) execute their job chart.

Later in the evening Sri Venkateshwara will ride on Aswa vahana, the last of the Brahmotsavam vahanaas. As per legend, Kalpavruksha is an iconic divine tree, which blesses everyone with boons including health, prosperity and longevity in life.

Accompanied by Sri Krishna Swamy on another Tiruchi, Sri Malayappa as Jaganmohini, in all His divine splendour, holding a golden parrot in one hand, seated elegantly on an ivory Palanquin draped in silks and glittering diamond-studded gold jewels.

With this Avatara, the almighty sends a message to His devotees that don’t fall prey to earthly desires as the entire cosmos is a mystic. The only way to overcome the myth is to concentrate on the Supreme Almighty with pure devotion.

Garuda is the favorite vehicle of Sri Maha Vishnu. Besides being the daily transport, Garuda also occupied the top slot in the Dhwajam that heralded the commencement of the Brahmotsavam. As the Key watcher of happenings around Sri Venkateswara Swamy, Garuda also supervises the entire proceedings of Srivari Brahmotsavams,says the legends.

Seventh Day: Sri Malayappa blessed devotees on the seventh day morning of the ongoing annual Srivari Navaratri Brahmotsavam on Surya Prabha Vahana in Sri Govindarajaswamy Alankaram at the Kalyana mandapam. Legend says that the Sun God, the key architect of life, is dragged by seven horses with Anura as his charioteer. Sun God is being represented for blessing with good health. It is the common belief that the darshan of Sri Malayappa on Surya Prabha Vahanam would provide long life to devotees and also a relief to them from all illnesses

Srivari Annual Brahmotsavam On the eighth day of the ongoing Srivari annual Brahmotsavam, Sri Malayappa and his consorts Sridevi and Bhudevi sparkled on Sarva Bhupala vahana stationed at Kalyana Mandapam inside Srivari temple. Traditionally Rathotsavam  (wooden chariot) is organised on the penultimate day of Brahmotsavam but in view of covid guidelines, TTD held Sarva Bhupala vahana as an alternative. The term ‘Sarvabhoopala’ means ‘Emperor of Entire Universe. Sarva bhoopala meaning the God in charge of the earth, water and air become the pall bearers of Sri Malayappa vehicle. The objective is to display that all the Dikpalas of the universe were not just under the control of Lord Venkateswara but also that there was no chance for misuse of office by them under his diligent vigilance and directions.