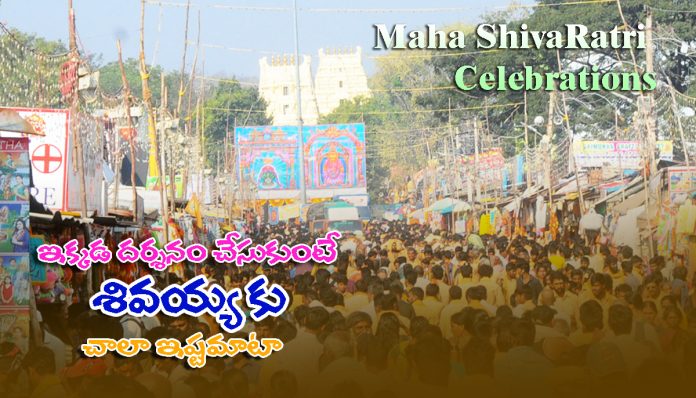 Mahashivratri celebration in Andhra Pradesh, especially at the Srikalahasteeswara temple in Srikalahasti and Mallikarjuna Swamy temple in Srisailam are getting lavish, gathered lakhs of devotees. temples are worth witnessing for all devotees of Lord Shiva. 2021 Maha Shivaratri Brahmotsavams is one of the most famous festivals celebrated in Srisailam.In 2021 Brahmotsavams will begin on 4th March and Concludes on 14th March. Srisailam Mallikarjun is the second of the 12 jyotirlingas of Lord Shiv. The large number of devotees gathered at the time of Swamy Deeksha.

The Srisailam Ghat road to Srisailam town is very good and passes through the jungle. On the way up and down the temple, amazing experiences for nature lovers. Srisailam Temple is a truly ancient temple – huge, clean, well-managed by the mandir committee. There is a bazaar around the temple. available all authentic, fresh items sells something at better prices than Hyderabad. Follow heart and feel the natural smell of pure environment.

Similar to most Hindu shrines, the priests would hurry you up so keep your eyes wide-open and focus on your mind/chanting/prayers along with darshan of the deities. For the Mahashivaratri celebration, Srisailam temple organised many new setups. for Transporting the, services Telangana government of India provides additional services.

TSRTC would operate 325 special buses including 10 A/C mini Vajra buses to Srisailam on the occasion of Maha Shivaratri on February 21. With the large number of devotees in mind, they arrange all set to comfort journey, hassle-free ticket booking services. The Maha Shivaratri special buses would be operated based on the rush of the passengers. The corporation would operate special buses on February 20 and 21. With the temperature rising, the corporation would be running the 18-seater Vajra Mini A/C buses from Lingampally and MGBS to Srisailam during Shivaratri. On-Demand of public, number of bus will available for every 10mins from MGBS.

The fares from Lingampally to Srisailam would be Rs 530 and from MGBS to Srisailam the fare would be Rs 500 per head. The passengers can contact 9959226153 and 9959226133 for further information. for ticket booking services, advance reservation you can contact or visit www.tsrtconline.com

Srisailam temple arranges brahmotsavams all day arranges with ease, the stage is set for the 11-day Maha Shivaratri Brahmotsavams at the Srisailam temple from Thursday as nearly 10 lakh pilgrims from as far as Maharashtra is expected to visit the town. for 2021 maha shiva ratri the devotees will have to adhere to Covid-19 Appropriate Behaviour (CAB), such as wearing face masks, maintaining physical distance, and using sanitiser regularly on the temple premises. for regular health checkups, government arranges separate teams have been formed to conduct health screening and Covid-19 tests. Stay safe, enjoy divine.

Know more about the Festival, Mahashivratri, the festival that marks the convergence of two great powers i.e. lord Shiva and goddess Parvati is a festival that is celebrated with much aplomb in India. In Night time of Maha Shivaratri spent the day without sleep. With celebrations taking place in different parts of the country, it is a day that is considered very auspicious and people offer their prayers to Lord Shiva with all their heart to seek his divine blessings. many number of devotees follow Fasting rules. The festival itself means the night of Shiva. Srisailam Temple festival is celebrated on a grand scale almost everywhere in India.

Mahashivratri is celebrated as the day when Shiva married Parvati and devotees of Shiva ensure they offer prayers on the 14th day of the Hindu calendar month, Phalgun. Hindu temple guide released 2021 Calendar with all major festivals Amavasya, Pournami dates. Shiva is one of the three gods that form the Hindu trinity and holds and holds an important place in the Hindu pantheon. Though people pray to Shiva for 12 Shivratris through the year, the Mahashivratri is the one where people fast through the day and offer prayers through the night.

Telangana Srisailam Temple Brahmotsavams will begin with Yagasala Pravesam, Shiva Sankalpam, and Ganapathi Puja on Thursday, and conclude with Dhwajavarohana on the Dhwajasthambham. On this special day Temple committee board offering a new setup for decorating swami vary. On behalf of the state government, Endowments Minister Vellapalli Srinivas Rao will offer pattu vastram to Lord Mallikarjuna Swamy and Goddess Brahmarambha Devi on March 10. March 11th, Thursday will be celebrated as Mahashivratri all across India.

It is the day when Lord Shiva, the god of destruction is worshiped. Astrologically speaking, the 14th night in the dark month of Phalguna is celebrated as Mahashivratri. An auspicious day celebrating all day, that this is the day Lord Shiva appeared in the form of a linga and therefore, shiva lingas all across the world are worshiped on this day. While some legends say that this is the day Shiva held poison in his throat to save the world turning him blue and earning him the name Neelkanth, ( Know More Interesting Story About NeelKanth Temple ) others believe this is the day he cursed Lord Brahma when lied as Lord Shiva was trying to resolve the quest for power between Lord Vishnu and Brahma.

For conducting Maha Shiva Ratri other deities Vijayawada Kanaka Durga temple authorities, Tirumala Tirupati Devasthanam TTD Board, Kanipakam temples management also part on this auspicious festival. As per the tradition, the Kanaka Durga temple authorities are expected to offer silk cloths to the presiding deities on March 6. The next day Tirumala Tirupati Devasthanams (TTD) and Kanipakam temple officials will offer silk cloths to the presiding deities.Nearly 1,500 police personnel have been deployed in the temple town for the festival.

Come March 10th night and the whole of India will be chanting the name of Lord Shiva all night long to celebrate one of the most awaited festivals of the year. Srisailam Mahashivratri falls on the 14th night of the lunar month of Phalgun in the Hindu calendar. when converts to English regular format calendar maha shiva ratri festival celebrating on March 11th. There are several reasons behind the celebration of this festival. It is said to be the day Lord Shiva married Goddess Parvati. Some belief it to be the day Lord Shiva attained the title Neelkanth as he turned blue after holding poison in his throat. No matter what legend people believe in, Shiva devotees celebrate the day and night with great religious fervor. Follows many Rituals range from singing and chanting to smearing bodies with ash to drinking thandai. Special poojas, lord sevas will perform whole night.

Srikalahasti and Srisailam are known for their Shiva temples and attract a huge number of devotees from all around the country every year during Mahashivratri. In Andhra Pradesh state, Srikalahasti temple is one and only famous largest temples. expecting 20lakhs devotees participated in Srikalahasti temple on the maha shiva ratri pooja ceremony.

The Srikalahasteeswara temple, which is one of the most popular Shiva temples in south India, witnesses long queues of devotees for the Rudra pooja and Shivratri celebration.
Legend speaks Renowned as the place where a devotee Kanappa offered to sacrifice his eyes to save the Shiva linga, the temple hosts grand rituals during Mahashivratri. It is also known as the Rahu Kethu Kshetra where people with Rahu Kethu Doshas and Sarpa Doshas come to heal their doshas. House Vaasthu dosha, Health issues, financial disturbances, marriages issues, divorce cases, court cases everything related to bad face will cured here. When negative energy overtakes positive in you, it will give negative results only.

Rahu Ketu pooja is the only solution for all Kuja dosha problems. Another great time to witness Mahashivratri celebrations in Sri Mallikarjuna Swamy Temple in Sraisailam. You can book your accommodation online and plan a trip to these temples along with a Tirupati visit. Srikalahasti has accommodation services also. visit to these temples during Mahashivratri is the best way to experience Hindu culture and Shiva devotion which is predominant all across India.

Srisailam Temple Located on the Nallamalai Hills, the temple is reputed as it is home to one of the twelve jyotirlingas. It is one of the most ancient kshetras in the country.
Mahashivratri holds the significance of various forms in Hindu mythology.

Maha Shiva Ratri is believed that those who worship Shiva on the night of Mahashivratri are absolved of their sins and attain moksha. Purity from heart observed. Married women pray to Lord Shiva for the long life and prosperity of their respective husbands and unmarried women pray for a husband as ideal as Lord Shiva himself. It is said that when Parvati Devi asked Lord Shiva which prayer pleases him the most, he replied saying that it is the prayers offered to him on this day.

He declared that those who offer prayers to him on this very day will be freed of all sins. On account of this, devotees fast all day and night during Mahashivratri and wash shiva linga in temples with milk, honey, and water. Aartis and poojas are conducted praising Lord Shiva.

According to another legend, Mahashivratri marks the day a poor hunter from Varanasi named Suswara offered some sacred bilva leaves to a shiva linga while he was staying awake and alert all night to keep away from some animals. Unknowingly, the hunter had kept a night-long vigilance of the linga and worshiped the leaves. So, staying awake all night to worship Lord Shiva became a ritual. From a spiritual perspective, staying awake signifies alertness and oneness of purpose to meet one’s goal. It is said that Shiva is the form of supreme consciousness and offering the bilva leaves to him returns the devotee to the ultimate level of consciousness resulting in the awakening of the individual.