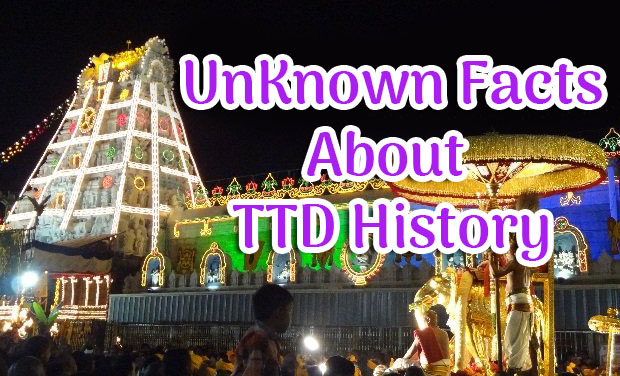 The earliest reference that we are aware of to the Tirupati temple is found in the Sangam literature. Most of the references are to Vengadam in general and not to the temple in particular; but one reference can be accepted as specifically to the temple. It says that Vengadam is prosperous because of the festivals Celebrated in it.

This may be taken as a clear reference to the annual festivals which have been a feature of the temple even from the beginning, for almost all the Puranas say that as soon as the temple at Tirupati was constructed by Tondaman Raja, he instituted the festival to the God. Tirumalisai Alvar, who belongs almost to the same age, makes specific reference to the festival, of Onam. This is otherwise called the Brahmotsavam, because it was inaugurated by Brahma.

Vengadam or Tirupati is frequently mentioned in the poems of the early Alvars. Although they often refer to the God in general terms as Vishnu, still from the way in which they refer to the God we may conclude that they have unmistakably the God at Tirupati in their mind.

Poygai Alvar says that the God at Vengadam is in a standing posture; he further says that God Vishnu is in the heaven on earth in Vengadam. Again he says that the great snake, Adisesha, serves Vishnu as an umbrella when he walks, athrone when he sits, as sandals when he stands, as bed when he lies down. He also serves as a fine silk vestment or pillow in bed.

Bhutatta Alvar similarly describes Tirupati as a place where Vishnu appears in a standing posture. Pey Alvar refers to the God at Vengadam as being the Lotus-born (Lakshmi) on his chest. These Alvars identify the God at Vengadam with other incarnations of Vishnu, like Varaha, Trivikrama, rama and Krishna. They describe him as a young boy and call him ilamkumaran, Gopalaka(Govinda). This last statement is significant and will be referred to again later on.

The Puranas say that God Vishnu, by his own choice, came to live in seclusion on the hall of Tirupati in his loneliness caused by the departure of goddness Sri from his side, owing to the insult caused to her by the touch of the foot of Sage Brigu. After some time, he assumed the form of Srinivasa for showing himself to a devotee who had been performing penance for him.

While Srinivasa laid concealed in an anthill, a cow of the king of the locality, going to graze on the hill, emptied her udder on the anthill daily and returned home dry. The king got information of the phenomenon and discovered God after digging the anthill. He built a temple for God at the spot and Srinivasa condescended to stay in it.

The ancient tamil work, Silappadikaram, refers to Tirupati and the God in the temple there. The statement in the work must carry weight for contemporary history, especially as it was written by a non-Hindu. It describes the God at Tirupati as standing majestically on the high hill of Vengadam, which is full of streams, like a blue cloud, with red eyes and dressed in flower garlands, holding the fearful discus in one hand and the milk-white conch in the other.

Tirumalisai Alvar was a contemporary of the first three Alvars. In his poems he several times refers to Tirupati and god on the hill there. He says that both Brahman and Siva were among the worshippers of Vengadam and that the hill at Vengadam was full of streams. He also says that the celebrations of the Onam festival are a regular feature of Vengadam. We know that the festival on the day of this asterism is peculiar to Tirupati. This Alvar also refers to the God at Tirupati as a young one (Kumara).

Nammalvar and Periya Alvar, no doubt, refer to Tirupati but their references are more or less of a general character and give us no details of a realistic character as we find in the early Alvars. The same remarks apply equally well to the work of Alvar, a ruler of Chera country, has written some poems on the god at Tirupati but he does give any specific details in them, in relation either to Lord or the worship in the temple.

He longs to render devoted service at the holy shrine of Tirupati and would wish to be anything on the hill-a-water-bird, a fish, a menial servant, the champaka tree, or a door-step. From the words of the Alvar we may infer that Tirupati in his time occupied such a high place among the holy places of Vishnu as a royal monarch should aspire to be at least a doorstep in it. Tiruppan Alvar refers to Vengadam twice in his poems. Although these references too are of a general nature, they still indicate that the image enshrined in Tirupati is Vishnu.

Tirumangai Alvar, in his poems, makes reference to the God at Vengadam more than a dozen times, but most of them are of a general nature. In one place, he refers to God as teaching the secret mantra of the worship of Vishnu to Tondaman chakravarti. There is another reference in which God at Tiruvengadam is said to be Krishna, who helped the Pandavas.

Two inscriptions of the Pallava period relate to gifts by some lady. She made many presents and endowments and desired that their management should be put under the direction of the sri vaishnavas. Another inscription of the period relates to the gift of some land for the purpose of the festival on Margalidvadasi i.e., the 12th day of the bright fortnight in the Margali month (December-January). One inscription of the time of Rajendra chola1 dated 1018 A.D.refers to an official enquiry conducted in regard to the arrangements for carrying on the worship in the temple of God at tiruvengadam.

After relating the place and nature of the enquiry, the inscription records the decision of the officer who conducted the enquiry and concluded with the remark that the decision was accepted by the Sri Vaishnavas, one of the inscriptions of the reign of kulottunga 1. (1070-1148A.D.), which refers to the gift of milk and curds to God by a lady, refers to the god in the temple as tiruvayppadi tirumalai Alvar, which means “the lord of the cowherd village on the hill”. This is a clear evidence of the fact that, in the time of kulottunga1, the god was regarded as an aspect of Krishna (Vishnu) as by the Alvars.

We thus see that the temple of Tirupati is a very ancient one and there has been a continuous tradition that the shrine in vengadam is dedicated to Vishnu.the sangam literature, the Puranas and epigraphically records support the tradition. The fact that the Tirupati temple is not included in the thousand famous Saiva temples and that no saiva saint. Refers to it, also supports the Vaishnava tradition.

Notwithstanding the continued tradition and the literary and epigraphically evidence in support of it, doubts are still entertained in some quarters regarding the original vaishnava nature of the icon or the masculine form of the archa. It may be worthwhile to examine some of the arguments urged by the dissenters and expose their futility.

Similarly the represents of god as having matted hair not prove that it should be that of Siva. As a matter of fact the icon of srinivasa has no matted hair but only disheveled hair. Again matted hair is not an invariable attribute of Siva a certain style of the icons of Vishnu always included matted hair in it.

In all the portraits of the Gods, whether drawn or painted, the hair is always represented in loose locks expect those of Siva. Loose or untied hair does not necessarily mean matted hair. Want of acquaintance with the sastra leads to misinterpretation of facts.

Saraswathidevi blessed him as follows-

May all your adversities be removed!

May the sinful desires be destroyed!

May you get immense happiness!

May your people be happy!

May the wealth remain steadfast in your kingdom! ”

Meanwhile the sun has risen. People awoke. The maids in the palace thought that Padmaleela has come back from heavens again. They were very pleased and embraced her. The people in the kingdom started informing each other that Padmaleela had attained spiritual powers and with them, she brought the king back to life again and also brought another wife to him. Many such similar stories had started to spread amongst them.

King Padma, who was reborn, is still in confusion. He started to understand the happenings through others Pleased that he was reborn again. Did all the rituals prescribed for such an event. His ministers, subjects, the other rulers under him – all gathered together again to perform another coronation ceremony to him as their king, with much gaiety and happiness.

In the company of his two wives, the king gradually becomes a realized soul and these three realized souls spent their time in self-analysis, while in the external life, the king ruled for several years to the satisfaction of everybody and ultimately all the three attained total liberation

The Gita has been interpreted by countless saints of various schools of philosophy. The speciality of sahasranamam is that it was recited by bhishma to yudishtira while Sri Krishna himself listened to it and was retold by vyasa. It is varying easy to learn by heart, especially with srimath M.S Subbalakshmi’s very popular recital available in the form of audio records. There are many authoritative commentaries to it. Adi sankara’s commentary is the earliest known. In his Bhaja Govindam stotra, sri sankara places sahasranamam on par with the gita. (geyam gita nama sahasram). Gita has to be understood and meditated upon. It has to be assimilated and practiced. What is said in the sahasranamam has to be only recited to attain the lord. Sri ramanuja instructed his principle disciple parasara bhattar to write a detailed commentary to Vishnu sahasranamam which is in tune with the sri vaishnava philosophy. It is known as bhagavad gana-darpana.

There are nearly 1030 names in the verse. The commentators take some of the successive names together as one. Therefore the total comes to thousand. In this coupling of names to explain, there are different between adi sankara’s and bhattar’s approach. There are 960 names in single words (Bvisvam,vishnur), 6 names which can be taken as single or two together (havir,harih), 30 eka-names which are made by more than one word(mukthanam parama gatih).

Reciting the thousand names of the lord has been the sadhana performed by all our acharyas and the azhwars. There are many references to this in the verses of the azhwars. Periyazhwar who sang the thirupallandu to the lord invites all bhagavatas to join him in reciting the sahasranamam.

Reciting sahasranamam is beneficial by itself. Yet to derive the full aesthetic appreciation and benefit, its recitation should be done with understanding of the meaning each name by studying the commentaries.

The specialty of Vishnu sahasranamam is that it can be learn and recited by all without any discrimination based on caste or breed. The sacred name of sriman narayana recited as sahasranamam is very sweet to ear and gives relief from the three-fold shadows, from all fears and serious diseases. It gives happiness and eternal peace.