Virupaksha Temple Hampi one of the beautiful temple. It is 7th century Shiva Temple in Hampi. Landmarked in Karnataka state. Hampi is UNESCO World heritage site. temple a humble structure dedicated to Lord Shiva. The temple is located close to the Tungabhadra River. The architecture of the temple is so amazing that one can gaze at its beauty for hours. The rich carving of the temple offer an insight into the religion of the people who lived here. Check other attractions of Hampi.

Main shrine is dedicated to Lord Virupaksha, an incarnation of Lord Shiva and the 49-m-high (approximately) tower or gopuram of the temple is said to have been constructed in 1442. It was established during King Deva Raya II’s reign. The city of Hampi is located on the Tungabhadra River’s embankment. The temple is dedicated to Lord Virupaksha and his consort Devi Pampa. Virupaksha is a form of Lord Shiva. Near the Virupaksha Temple are small and dedicated temples to other deities. The main temple consists of a sanctum, three ante chambers, a pillared hall and an open pillared hall. The 50 meter tall nine tiered gateway gives access to the outer court containing many shrines. The smaller eastern gateway leads to the inner court and numerous smaller shrines. A narrow channel of the Tungabhadra River flows along the temple’s terrace and then descends to the temple-kitchen and out through the outer court.

The Virupaksha or the Pampapathi temple is the main center of pilgrimage at Hampi. It is fully intact, and it incorporates some earlier structures. This temple has three towers, the eastern tower rises to a height of 160 feet and is nine tiered. It dates back to the first half of the fifteenth century and was renovated in the sixteenth century by Krishnadevaraya.

This tower has been built such that an inverted shadow of this huge tower falls on the western wall of the temple through a small hole behind the sanctum. The northern gopuram has five storeys, and the inner eastern gopuram is endowed with three storeys. Gopuda and Rang Mandapam were built by Krishnadevaraya in 1510 AD in 1509 AD. Virupaksha Temple is the main center of pilgrimage in Hampi and is considered the holiest sanctuary for centuries. The temple is still intact in the surrounding ruins and still, Lord Shiva is worshiped in the temple. Following the period of the Muslim invasion, some modifications were carried out, as most of the architecture, including pillars, had been severely damaged by Muslim overlords. In front of the sanctum, there is a lovely mandapa hall, which was erected in the Vijayanagar architecture, complete with beautiful paintings and Bas Relief panels. The Gopura is approximately 165 feet tall, 120 feet deep, and 150 feet wide. It is said to be one of the tallest Gopuras in southern India. This complex also contains two medium-sized Gopuras. One is the Northern Gopura, which is made up of five layers, and the other is the Inner East Gopura, which is made up of three tiers. Bhuvaneswari and Goddess Pampa are the most important and charming sub-shrines. The shrines are far older than the remainder of the temple’s entrances. Richly carved entrances and short round pillars. 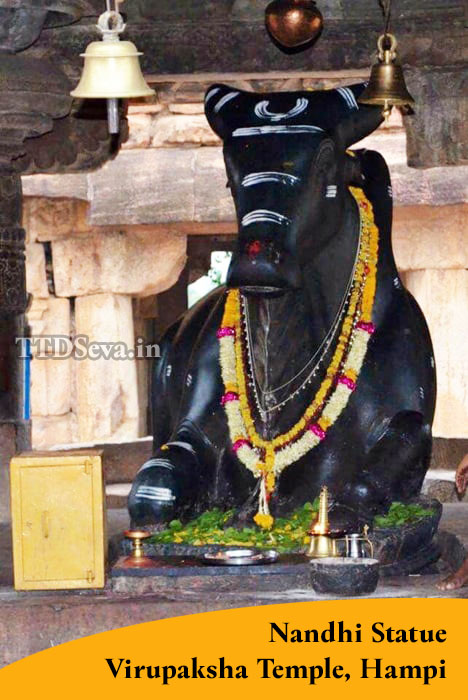 Krishnadevaraya also built a mandapam in front of the sanctum, and embellished it with Vijayanagar style bas reliefs and murals. Several of Shiva’s manifestations, and the ten incarnations of Vishnu are portrayed here, as is the classic scene from Mahabharata depicting Arjuna’s shooting the fish device in order to secure Draupadi’s hand in marriage. There is also a mural depicting Vidyaranya the spiritual founder of Vijayanagar in procession.

In the vicinity of the Virupaksha temple are several dilapidated mandapams. In front of the temple was once an ancient shopping center lined with mandapams, the ruins of which stand today.

Celebrating festivals, The main gateway boasts elaborate nine tiers and the smaller gateway gives access to the temple’s inner courtyard. The three-headed statue of Lord Shiva’s sacred mount, the Nandi bull, is a major tourist draw. In December, when the temple celebrates the marriage of its presiding deity to his consort Goddess Pampa, it draws thousands of devotees. Another popular time to visit the temple is February, when the annual chariot festival is celebrated. 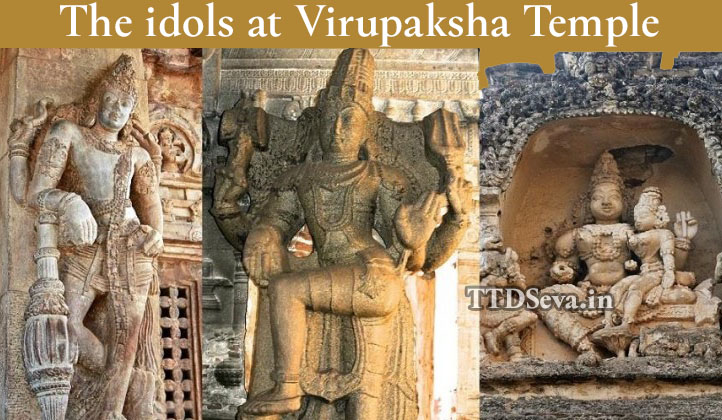 Carved Designs, Architecture temple The temple is carved in stone, and its walls, pillars, panels and columns are decorated with beautiful carvings depicting episodes from Shiva’s life, different scenes from the Ramayana and the Mahabharata and scenes from Krishna’s childhood.