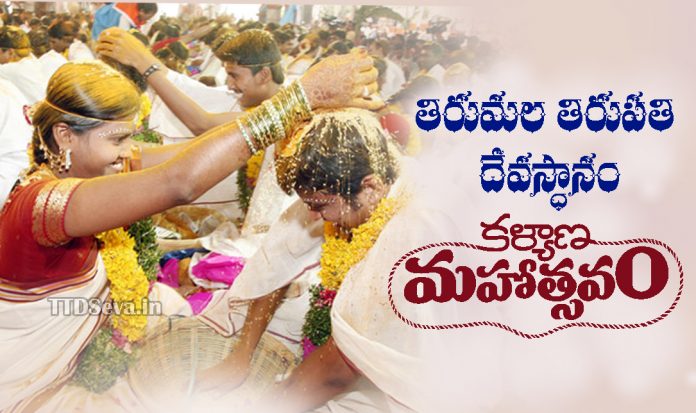 TTD Kalyanmasthu programme was launched in 2007 by YS Rajashekara Freddy garu with an objective to relieve the poor people from the debt trap while performing the weddings in their families. for newly married couples ttd annouced special package, The newlywed will be provided ‘darshan’ of Lord Venkateswara at Tirumala and transport and accommodation facility at 50 per cent concession. it offer eligible for 3-months from the marriage date.

Every year thousands of married at the mass marriage ceremony Kalyanamasthu, organsied by Tirumala Tirupati Devasthanams (TTD) Till date, TTD has performed nearly 33,000 mass marriages under the Kalyanamasthu programme in five phases, across Andhra Pradesh. Describing `Kalyanamasthu` as a meeting of hearts, Tiwari praised the services of TTD, the body that administers the Lord Venkateswara temple at Tirupati. The TTD provides `mangalsutra`, silver `mettelu`(rings worn on the fingers of feet), new clothes, sacred books and meals on the occasion.

The couples, who got married as part of the programme, and their parents would also be offered the Lord`s `darshan` at Tirumala. TTD Trust Board under the Chairmanship of Sri YV Subba Reddy has decided to relaunch this programme during last board meeting and now the pundits have finalized the dates

For 2021 TTD Mass Marriage ttd announced statement check out below

The team of Vedic Pundits fixed the auspicious dates of the Kalyanamastu mass
marriage program and handed over the Lagna Patrika to the TTD Executive
Officer Dr KS Jawahar Reddy on Wednesday.

The Pundits team after detailed discussions have finalized three auspicious dates
in the year 2021 including May 28 on Vaishaka Bahula Vidiya Friday Mula
nakshatram, Simha lagnam between 12.34 pm and 12.40pm, October 30 on
Aswiyuja Bahula Paksha Tatkala Dasami Saturday Mukha nakshatram of
Dhanur lagnam between 11.04am and 11.08 am, November 17, Karthika
Shukla Paksha Tatkala Chaturthi Wednesday Ashwini Nakshatram and Dhanur
lagnam between 9.56am and 10.02 am. He said the Kalyanamastu programme
is aimed at organising free mass marriages to the poor couple. The programme
was successfully conducted in six phases between 2007 and 2011 as part of the
Hindu Sanatana Dharma Pracharam programme.

Later the trays consisting of sacred material including Lagna Patrika, vermilion,
turmeric, kankanams, fruits etc. were carried overhead by TTD EO, Additional
EO and other pundits, As per practice the Lagna Patrika was placed at the lotus
feet of Sri Venkateswara Swamy inside Srivari temple and offered special pujas.