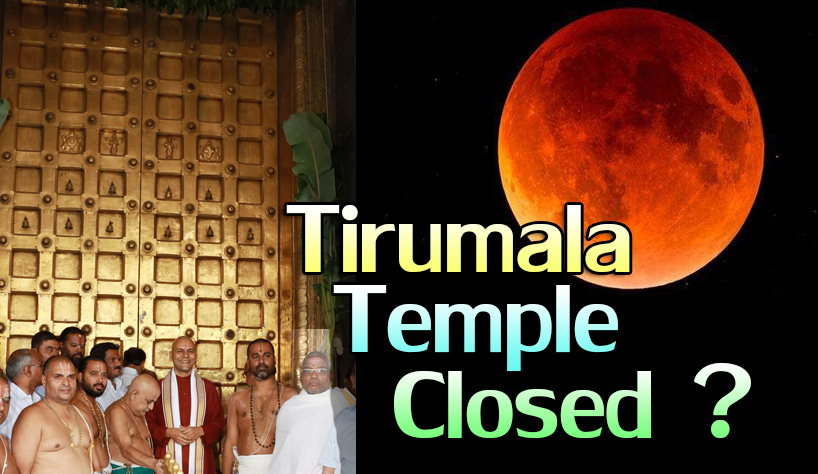 TTD Temple closed on Amavasya, Pournami dates, performed special poojas, as per the temple’s Calender, the eclipse is scheduled to commence early mornings till continue Afternoon. the following day closed remains all services, stopped several pooja on that date. As is the convention, the TTD has resolved to close the temple tickets booking online facility six hours in advance. Blocked that dates. With this, the main doors of the temple will be closed at the scheduled time, after observing certain rituals such as ‘suddhi’ and ‘punyavachanam’. Tirumala Tirupati Temple board announced closing hour to Lunar Eclipse day.

Srivari Seva main temple gates are closed, Tirumala temple is going to be closed for lunar eclipse day. Amavasya day, soudya pournavi on half moon day, TTD JEO Srinivasa Raju announced. Scheduled dates, the complete lunar eclipse will be formed at 11.54pm due to which the temple will be closed from 5 pm. requested to all pilgrims co-operate with Management. Devotees will be allowed for darshan after samprokshanam at 4.30am on the next morning day. TTD Board provided information statements for all complex, annadanam prasadam counters. Action will be taken to see that devotees wouldn’t get struck in queue lines or compartments at that time and also announced perfect times, that there wouldn’t be the distribution of food for devotees during that time. closed all services

TTD Tirumala Tirupati Board has canceled Arjitha sevas such as Kalyanotsavam, Unjal Seva, Brahmotsavam, Vasantotsavam, Tiruppuvada, Suprabhatha Seva and Sahasra Deepalankara Sevas on Grahanam Muhurtha timings in view of Graham while Suprabatham, Thomala, and Archana Sevas will be performed as Ekantham on Next days. Total temple clean with water, performed special poojas The sub-temples of Tirumala-Tirupati Devasthanams (TTD) will be closed from 05:00 pm hours on Grahanam day.

open to 05:00 am hours on July 28 Lunar eclipse day following Lunar eclipse on next Friday. All the local temples including Tiruchanoor, Srinivasa Mangapuram, Appalayagunta, Kapilateertham, Sri Govinda Raja Swamy, Sri Kodanda Rama Swamy temple both at Tirupati and Chandragiri almost follow the same timings which are mentioned by TTD Board for closing and opening of main temple doors on July 27 and 28 respectively, Tirumala Tirupati Board TTD release said. The darshan for devotees will resume after performing ‘Suddhi’, Clean temple ‘Punyahavachanam’ from 06:30 am hours onwards on Grahanam next day.