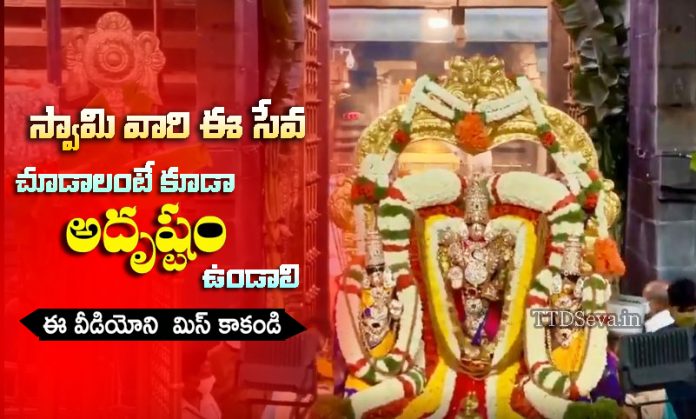 Special festival at tirumala. The traditional festival of Paruveta Utsava was grandly conducted on Sunday at Sri Kalyana Venkateswara temple in Srinivasa Mangapuram. Sri Venkateswara swamy blessings, as a part of the fete, the utsava idols were brought to Mukha Mandapam after daily rituals of and were offered harati and nivedana. Kalyanostavam celebrations. In view of Coronavirus restrictions, all the events were performed in Ekantham inside the temple. The ongoing annual sakshatkara Vaibhavotsavams at Sri Kalyana Venkateswara Swamy temple of Srinivasa Mangapuram concluded on Saturday with Garuda Vahanam.

Tirumala Sri Venkateswara swamy as a part of the event daily rituals of Suprabatham, Tomala Seva, Koluvu, Panchanga Sravanam and Sahasra Namarchana were performed followed by Snapana Tirumanjanam for the utsava idols of Sri kalyana Venkateswara and his consorts. Later in the evening grand Garuda vahana seva for the utsava idols and asthanams were conducted in the temple premises.

Sarva darshanam tickets issued at TTD Counters. TTD has commenced issue of offline tokens for Srivari darshan on Wednesday. The offline quota of Time slot tokens in free Sarva Darshanam upto June 17 is released by TTD at the rate of 3750 tokens per day. TTD has issued tokens upto June 14 at all its counters in Tirupati located at Vishnu Nivasam (8 Counters), Srinivasam (6 counters), Bhudevi complex near Alipiri (4 counters). Token Issued on time for the rest of tokens will be issued on Thursday from 7am to 3pm or till the quota exhaust whichever is before.

The annual brahmotsavams at Sri Prasanna Venkateswara Swamy temple at Appalayagunta. Earlier, the processional deities of Sri Prasanna Venkateswara Swamy along with Sridevi and Bhudevi were given celestial Snapana Tirumanjanam with different aromatic ingredients. Later the Sudarshana Chakrattalwar was immersed in a Gangalam filled with water within the temple premises itself in view of COVID 19 restrictions.