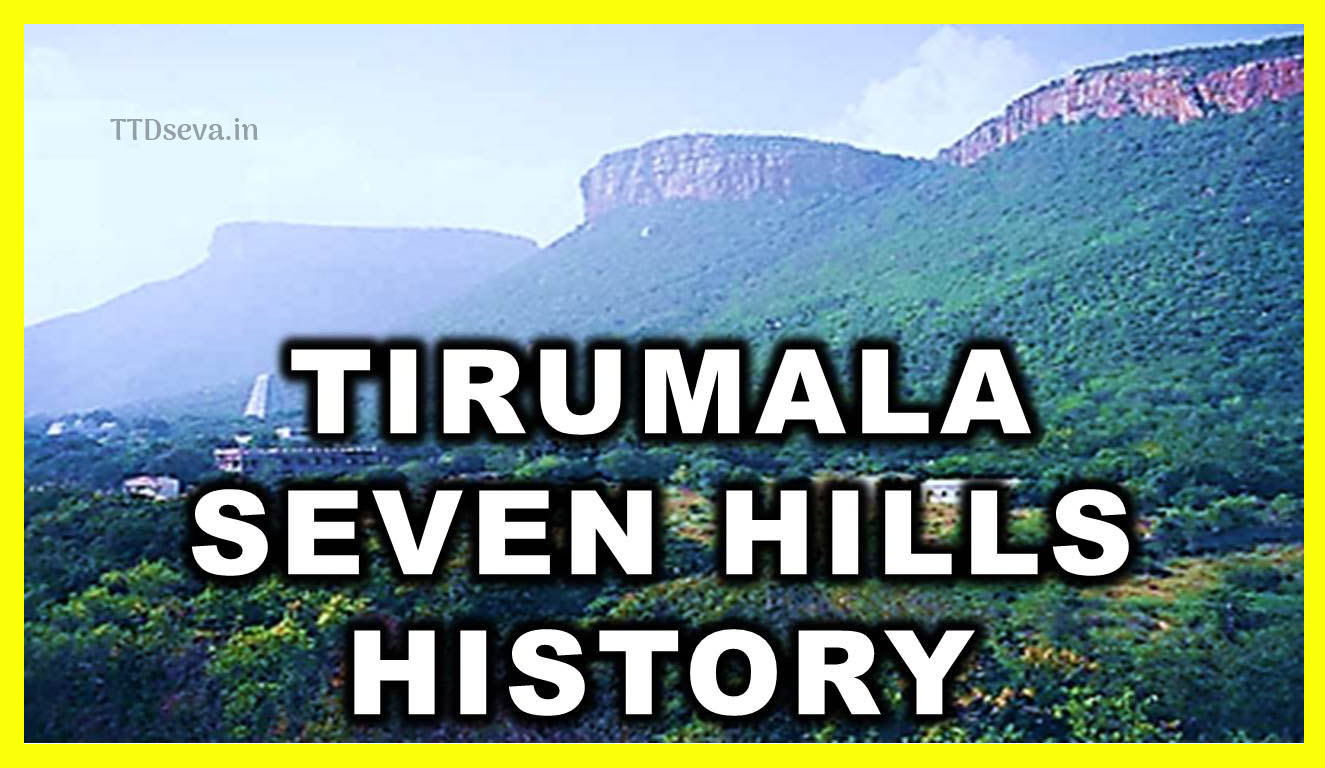 Tirumala Seven Hills Edu Kondalu Tirumala sacred place temple, Let we know about the greatness of seven hills. Importance and Significance of Tirumala Tirupati temple. The Tirumala Hills is the abode of Lord Venkateswara Swamy, Srinivasa Murthy is supreme deity of Hindus situated in Chittoor District. It is the holy pilgrimage of Vaishnavaites and one among the 108 Divya Desams.

Pilgrimage of Tirumala Tirupati temple TTD Place. It is situated 3200 ft above sea level, around 10.33 sq miles in area, and 90 miles away from Chennai. Located at Andhra Pradesh. Tirumala Tirupathi was named as Bhuloka Vaikuntham or Kaliyuga Vaikuntam by Sri Ramanujacharya. Tirumala Tirupati Seven Hills or Edu Kondalu are also known as Saptagirulu. Very special temple for Hindus, and very auspicious, having the great history and significance, importance each narrating a different story.

Know Tirumala Seven Hills History Behind Edu kondalu Seven hills. According to Hindu Epics Varaha Purana, Padma Purana story revealed. The Seven Hills History is so sacred that Sri Ramanujacharya refused to put his feet on these hills saying that these seven hills are Seven Heads of Serpent Adisesha on which Lord Himself resides as Shri Tirumala Venkateshwara Swamy

Awesome place Indian, Very auspicious special day We can not describe its beauty in words. Greenery, beautiful locations, waterfalls. The Tirumala hills narrate their story for everyone. According to Hindu Epics Varaha Purana, Padma Purana story revealed history and Greatness of Tirumala is describes here. Once the Lord asked Sage Narada for a suitable place on Earth where He could abide during the difficult period of kaliyuga Sage Narada suggested a place, Tirumala. by the banks of River Svarnamukhi.

The Lord was pleased. There have been several instances, best memories and mentions of this sacred shrine of Tirumala, Seven hills which are made up of seven peaks and consists of various theerthams present on it well described in many Holy Scriptures or Puranas related to Lord Vishnu, Lord Shiva, and Lord Brahma. Lord Sri Venkateswara Swamy temple Since the Lord was about to settle on Earth place for the period that Kalyuga was to last, a part of Heaven was to be brought down. Hence Adhisesha decided to take the form of one of the 7 hills of Tirumala. The true legend behind this holy shrine can be referred in these Hindu texts. as per Hindu Puranas consists all ethics Vedas. The Hindu Mythology consists of total of 18 Puranas. List of Tirumala Seven Hills Names.

Vrishabhadri Hill Known as Nandi hill, the vahana of Lord Shiva. Virshabhadri hill is the first hill. The first hill is known as Vrishabhadri. In Kruthayuga, near Thumbura Theertha in Tirumala place there lived a demon named Vrushabhasura who was a devotee of Lord Shiva. Devotees first visit the place, As he was an asura, he had the inborn demonic quality in him and he used to daily cut his head and offer the same to Lord.

Lord Hanuman Hill, Known as Most Powerful, largest hill of TTD Seven hills. Kesari, the king of Vanaras (monkeys), married Anjanadri. They were childless for many years. So Anjanadri went to a hill near Akasa Ganga and did penance for several years. so hills called as Anjanadri hills.

A first devotee who gave her hair to god. devoted offering hair to Neela Devi. Worship when lord Srinivas hit by Shepard on his head.( long story…) Nila Devi (or Neela Devi) is the third consort of Lord Vishnu, the other two being Sri Devi and Bhu Devi. given our hair to god is the Symbol of leaving our ego. In Paramapadam (Sri Vaikuntham) Sri Devi is seated to the right of the Lord, and Bhu Devi and Nila Devi to His left. Lord Balaji devotees give their hair. The Veda sings the glory of Goddess Nila in Nila Suktam.

Seshadri or Seshachalam Hill of Sesha, the dasa of Lord Vishnu. many devotees visiting this hill regularly, Way starts from his way. Most important peak among the Saptagiris is Seshadri. Seshadri is named after Adishesa, according to Bhavisya Puranam this hills called as Seshachalam. divine Serpent on whom Lord Vishnu rests. There is a story behind this Seshachalam hills.

Narayanadri Hill of Narayana. Srivari Padalu is located at Narayananadri hills. Various seva available here. devotees can perform Narayana Maharshi wanted to do Penance to see Lord Vishnu. He asked Lord Brahma to show an appropriate place, auspicious places where there won’t be any disturbances for his Penance. Tirumala Tirupati devotee can get peace by visiting the temple. Lord Brahma showed him a place where he did Penance for Lord Vishnu. Srivari matu is one of the places for the footpath to Tirumala .less numbers of steps with compare to another way

Venkatadri temple significance, The sacred temple of Sri Venkateshwara is located on the seventh peak, Venkatadri, Meaning of Venkatadri means to remove all sins in presence of god and lies on the southern banks of Sri Swami Pushkarini. venkatadri hills are so special.

Suggestions: Tirumala from Tirupati can be reached by walking as well as by vehicle. pedestrians usually go up hills from allipiri. This is another way a bit far from the main stream paths.. this is popularly known as srivari mettu and epics says that lord Venkateswara himself used to go up through this route