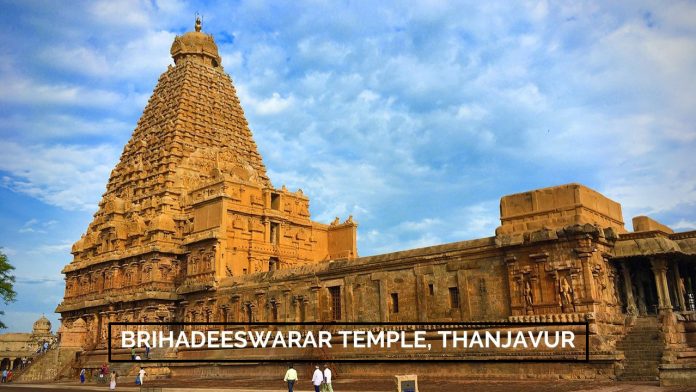 Thanjavur Brihadeeshwarar temple located in thanjavur district of tamilnadu is a world heritage site declared by UNESCO. The temple is famous for its unique style architecture as well as its glorious history and one of the most visiting place and tourist attraction not only in tamilnadu but also in entire southern india. Also popularly known as RajaRajeswara Temple, This was constructed by chola dynasty king RajaRajeswara first in 1010 CE. The temple is dedicated to lord shiva.

At the main entrance of the temple, There is a big statue of a bull( Nandi ) which is believed to be the transport of lord shiva. The statue is 2 meter high and is also made out of single piece of rock. The lingam(Lord shiva form) has a height of 12.13 feet. Apart from the main temple, There are several other structure is established inside the temple premises which include a pillared hall, assembly hall and many sub shrines. The walls of the temple has been carved with the statues of many Hindu god and goddesses including different contemporary dance forms of bharatnatyam.

How to Reach Thanjavur
Thanjavur is well connected with roads and railway network by other cities of tamilnadu and india. The nearest airport as well as major railway station is trichy which is located at a distance of 55 Kms from thanjavur.

So, If you want to explore the rich cultural and architectural heritage of south india, then set off for thanjavur breehadeeshwarar temple in tamilnadu.