Bramotsavalu Celebrated very grand manner, in Tirumala TTD Temple brahmotsavam celebrated, since it is believed to have first performed by Lord Brahma, all devotees belives he is creator. Lord Brahma Himself out of His reverence towards Lord Vishnu.

Brahmotsavam Festivals is celebrated in memory of Lord Srinivasa’s self manifestation day under the leadership of Brahma the son of Vishnu. this Navaratri Bramotsavalu festival is popular by name Brahmi raagam. Brahma in Sanskrit means Nine. (Nine faces) Hence this festival is also observed as a nine-day fete, So called as ” Navaratri Brahmotsavam / Navahnika Brahmotsavams )

On Tirumala Tirupati Devasthanam, Brahmotsavalu pooja celebrated every day. Universal Lord Sri Venkateswara enjoys over 450 festivals in a year. All including daily pooja, weekly, fortnightly, monthly, yearly festivals. all of them, Navaratri festival performed very ethical, the annual Brahmotsavams are considered most important as they are believed to have initiated by Lord Brahma. The nine days Brahmostavams festivals are one of the magnificent festivals celebrated at Tirumala Tirupati TTD.

Srivari Navaratri Brahmotsavam 2018 Dates: every festival considered as most important festival among all festivals in Tirumala. Performed daily seva, Arjitha seva, Thomala, Naivydya seva all among of poojas, Brahmotsavam stood very special. for 2018 year, due to Adika masam Ttd board planning to conduct Two Brahmotsavams.

one is in Annual Brahmotsavam (September 13 to 21 ) Another one is Navaratri Brahmotsavam (October 10 to 18) 2018. Tickets also issued as per TTD Calender Scheduled Brahmotsavam dates. every year in Dussera Navaratri period 9 festive days are celebrated as Brahmotsavams.

as per hindu sashras, Puranic sources says that Lord Brahma has appealed lord Vishnu for his curse that He was left out of all worships and Sacrifies, Yagnas etc. Brahmotsavam starts, So Lord Vishnu granted him permission to conduct all his utsavams by his hand. promised to perform as best of all seva for Continue 9 Days. So these festive celebrations are called navaratri Brahmotsavams. On these special days special pooja like Abhishekam & homam was performed and daily processions with various idols of the god are taken out through the main streets,Mada streets of the TTD temple.

For Navaratri bramotsavam, every year Lakhs of devotees will be visiting Tirupati Tirumala. eye feast for devotees, they can enjoy heartfully while watching, roaming at Thirumala streets. total festival atomspier at Tirupati places. on this occasion to get blessings of Lord Venkateshwara and experience heavenly feeling for pilgrims.

The annual brahmotsavams in Tirumala will be observed from September 30 till October 8. The important days includes Dhwajarohanam on September 30, Garuda Seva on October 4, Rathotsavam on October 7 and Chakrasnanam on October 8. Pavitrotsavams at Tirumala will be observed from August 11 to 13, Varalakshmi Vratam at Tiruchanoor on August 9, Sravana Pournami Managudi from August 9 to 15 in the selected temples in AP and TS.

Tirumala Tirupati Navaratri Brahmotsavam is Hindu favorable celebration commended each year at the Tirumala Venkateswara Temple at Tirupati. Telangana, Tamilnadu and Andhra Pradesh state peoples visiting regularly, at brahmotsavam time, the huge crowd gathered, visited Lord Venkateswara swami temple. As indicated by legends the beginning of this celebration is related with Lord Brahma ( Creator). It is trusted that once Lord Brahma worshiped Sri Balaji at the catchment territory of the blessed Pushkarini River to thank the Lord for the stronghold of humanity.

Importance and Significance of Navaratri Brahmotsavalu which truly signifies “Brahma’s Utsavam”. Combined by Brahma and Utsavam words. The celebration is praised with extraordinary energy amid the long stretch of October month. Continuous celebration up to Dasara festivals.

The festival of the Brahmostsava is performed more than nine-day. The importance of this Navaratri festival can be known by the fact that every year thousands of devotees attended to be the witness of this majestic festival at Tirupati.

The amazing response across world wide for Tirumala Navaratri Brahmotsavam. sure every devote can enjoy participating in the various rituals conducted during the nine days to seek the blessing of Lord Venkateswara Swami. Continuous nine days as biggest festivals of Tirumala history

Tirumala most visited and revered ancient temple in world is going to get glimpses of festive celebrations. Every day is a festive day in tirumala. But greatest among them is Srivari Dasara navaratri Bramhotsavams.

The schedule of Srivari Bramhotsavams Tirumala hill will start by performing tirumanjanam. Koil Alwar Tirumanajam for September is done on 27th day. On this day festive celebrations for cleaning temple premises starts. After one week with start of dussera navaratri bramhotsavams is observed. Recently chairman Sri Chadalawada Krishna Murthy has addressed to media. TTD board has taken several steps to failiate on coming devottees. All advance reservations for Rooms, Arjitha sevas are cancelled. 300/- e special entry darshan is only allowed for certain periods of day. 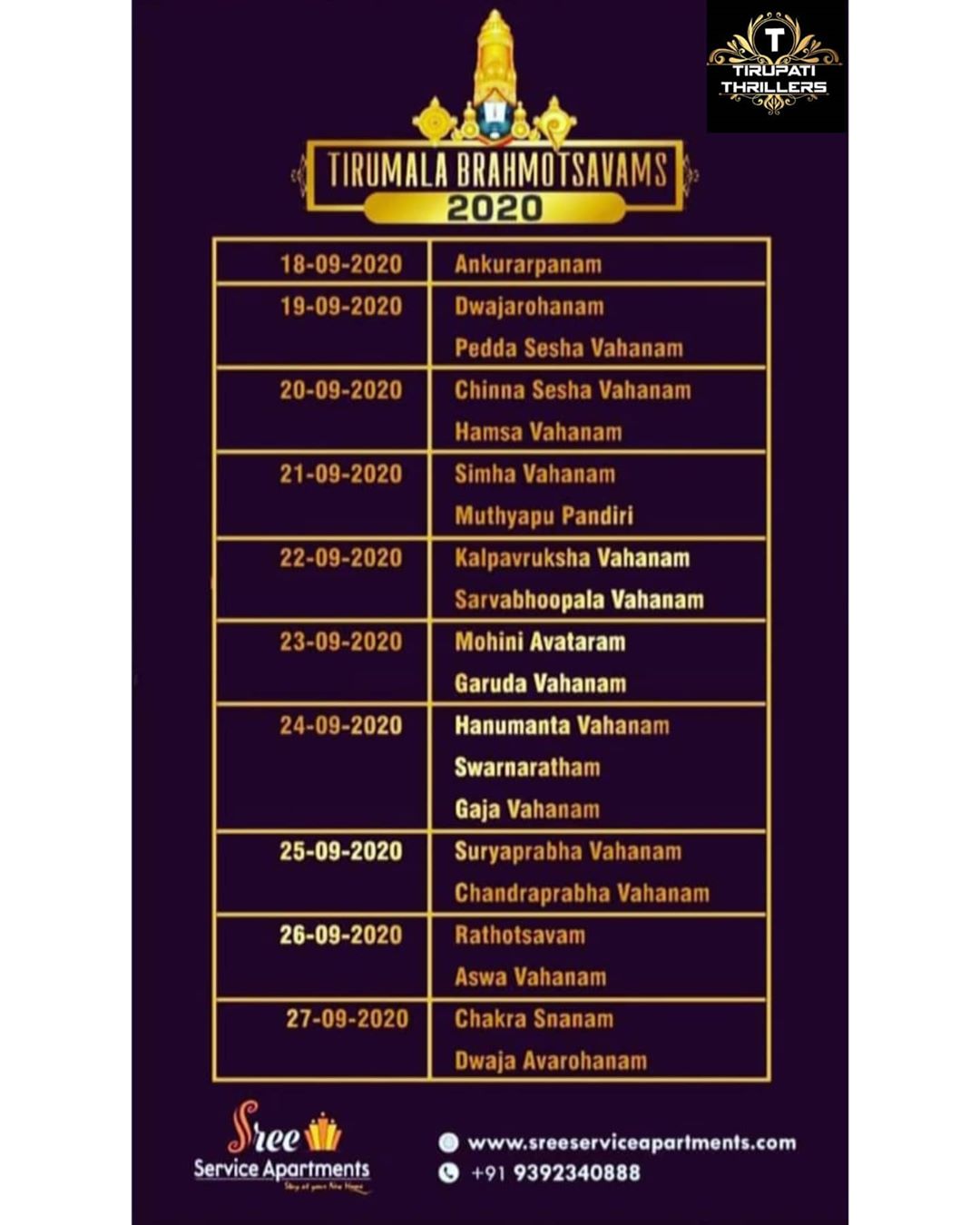 Dwajarohanam: 3rd October . On this day in evening time Sri vari Garuda Dwajam is ascended to Dwaja stambam top. It represents festival celebrations starting as per sastras.
Pedda Sesha vahana Seva: it is performed on this day night schedule. Sri varu will give darshan on pallaki seva decorated in Anantha Sesha vahanam.

More update is provided time to time. leave a comment if you want any feedback.

In 9 Days festivals,every day Swamiji dressed up with varieties customs. On the main day of the celebration “Anurarpana” custom is performed alongside the festival of Shri Vishvaksena. Performed special poojas. The “Anurarpana” custom means ripeness, wealth and success.

Amid each of the nine days of the celebration different religious exercises like homas, daily sevas, and day by day parades were different symbols of the god are taken out ious chariots vahanas introduce in the sanctuary at roams at Mada streets.

Navaratri festival started with ankurarpanam, devotes assimilated to take part in the auspicious festival often term the experience as a heavenly connect and blissful moments for pilgrims. firstly Gurudadhwaja Festival is hosted near Srivari Alaya Dhwajasthambham called Dwajarohanam. Then a procession dedicated to Lord Venkateshwara proceeds on Pedda Seshavahana and covers four streets of the temple.

Performed various sevas, At morning hours and evening hours. During this festival it is believed that the mighty snake alter itself as the vehicle for God, So-called “pedda sheesha Vahanam”. as well covers Chinna Sesha Vahanam. The main reason for celebrating TTD Brahmotsavalu festival is to pray to God for providing good health, prosperity which filled with high values and morals.

for more information, Follow us on Twitter. Stay tuned to TTD Seva Online.  If u have any question feel free to ask us. drop a comment below.