Rayachoty was previously known as Rachaveedu and Rajaveedu, and it is also spelt as Raychoti or Rayachotty. This is one of the temple of lord Shiva and the devotees call the god as veera bhadra swami in this place. as history speaks, This temple has a 3 tier Rajagopuram with 5 kalasas.This temple was built in 12th century. Veerbhadra Swamy Temple is a renowned temple of the region that lies on the banks of the River Kundu.

Sri Veerabhadra Swamy temple is a 1000-years old temple.
Rayachoty Veerabhadra temple is constructed in such a way that the rays of Sun fall on Lord Veerabhadra’s image for five days in the month of March. On the first day the rays fall on the feet of the Lord and it goes upward each day and finally touches the face on the fifth day.

The Veerabhadra Swamy temple at Rayachoty has a history of 1000 years. Whenever the great King Krishnadevaraya visited Srivari temple at Tirupathi, he used to camp at Rayachoti. he spent more than 10days at visit times. A stone was found near the Old Rayachoti own, which had a Tamil inscription dated S.S. 1155 (A.D. 1233).

Department of echology confirmed that stone belongs to Krishnadevaraya times. It says that a king called Nissankapratapa Raya, the lord of Karkatapura gave a grant to a temple, but those names could not be identified with any place in the vicinity. Another inscription of the same date found at Abbavaram, a village in the Rayachoti constituency, mentions another king’s name, Thomba, who was ‘first ruling from Kalukatayapuram and then Marujavaduyandapuram his capital.’ 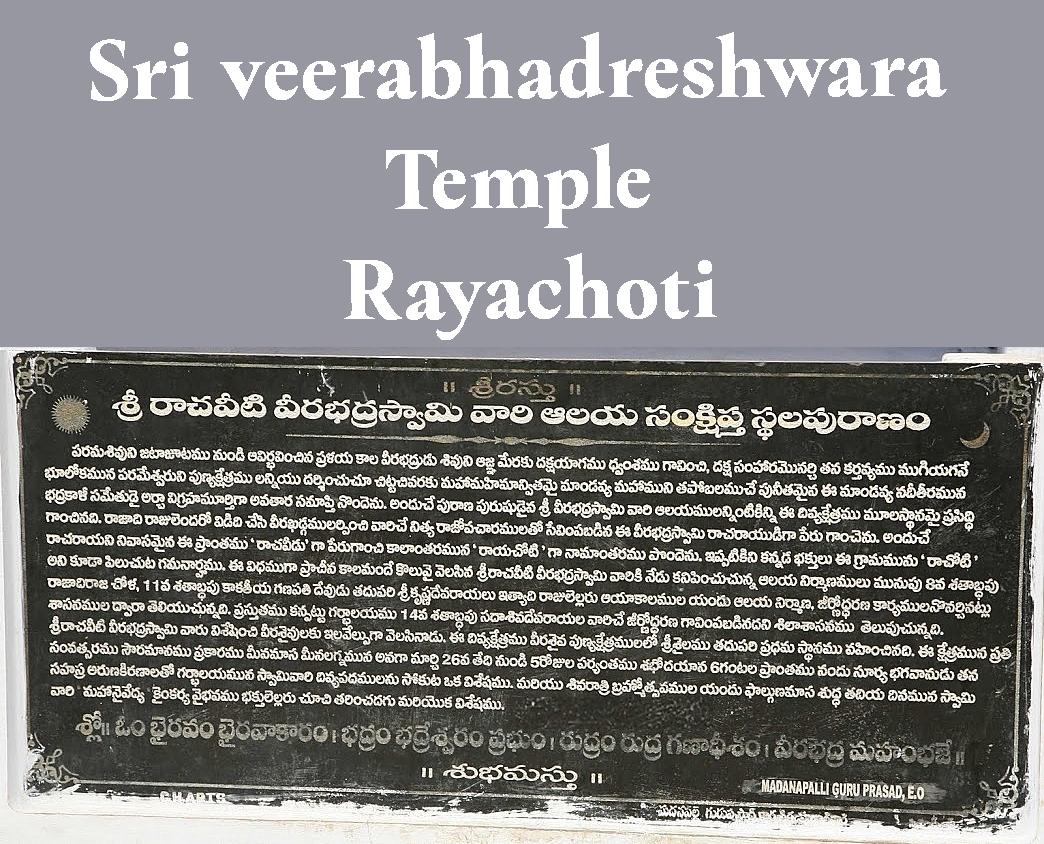 It is possible that both Karkatapura and Kalukatayapuram are the same place and it is also possible that Thomba who ‘was first ruling’ there was expelled from there by Nissankapratapa who called himself as ‘lord of Karkatapura.’ However, it is not known to what dynasties these kings belonged. One of the major attractions in this temple is single stone 56 feet Deepasthambham, which is very rarely seen temple of South India. Veerabhadra swamy temple can be seen with three major Gopurams, after entering in the main gopuram one can find Dhwajasthambam followed by Nandi statue which can be seen only in Lord Shiva temples.

The King Daksha Prajapathi (Cheif of the gods) organized a homaam or yagna with the youngest daughter Sati and did not invite Lord Shiva with a deliberate intention to humiliate and embarrass him. Lord Shiva was aware of King Disksha’s intention. When Sati grew up she loved Shiva and worshipped him secretly. King Daksha’s youngest daughter was Sati, also known as Dakshayani. She married Shiva in spite of her father’s approval. The father saw in Shiva unsavory attributes but his daughter saw in Shiva a doting and loving husband.

Dakshayani visited her father’s house who at that time was conducting the homaam. King Daksha did not receive his daughter properly as it was expected, and he also insulted Shiva. Daksha decide to perform a great horse sacrifice, and now also he invited all the gods except Shiva.

Dakshayani was furious, and she set ablaze at the yagna or homaam matnap. Lord Shiva came to know of this, and he too seethed with anger at King Daksha Prajapthi. She argued with her father and tried to convince him that Shiva was in fact the Supreme Being of the Universe. Daksha continued insulting Shiva and unable to tolerate her father’s words, she released the inner consuming fire, and fell dead at Daksha’s feet. Shiva tore a lock of hairs from his matted hairs, and from that Lord Veerabhadra took birth. 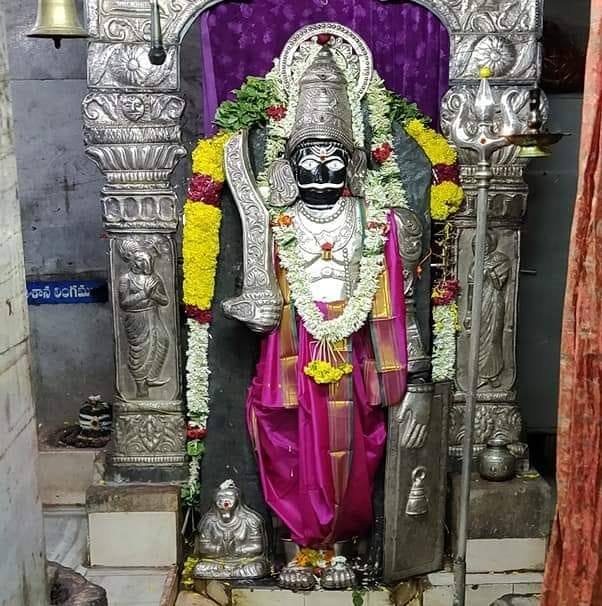 Veerabhadra and his Siva Ganas went to on to destroy Daksha’s yagna. During this time the sage Mandavya Maharshi was on a penance for the darshan of Lord Shiva, and he sensed the anger of Lord Shiva and what he would do to the king and kingdom of Daksha Prajapathi. In order to bring the situation to normal order, the sage Mandavya Maharshi pleaded to Ambica to calm down Veerabhadra. Thus, Ambica took the form of Bhadrakali to cool down Lord Shiva.

Once the situation came under control, the sage requested Lord Veerabhadra and Lordess Ambica to stay in the spot of penance, and that is present day’s Rayachoti and Veerabhadra Swamy Temple in Rayachoti. 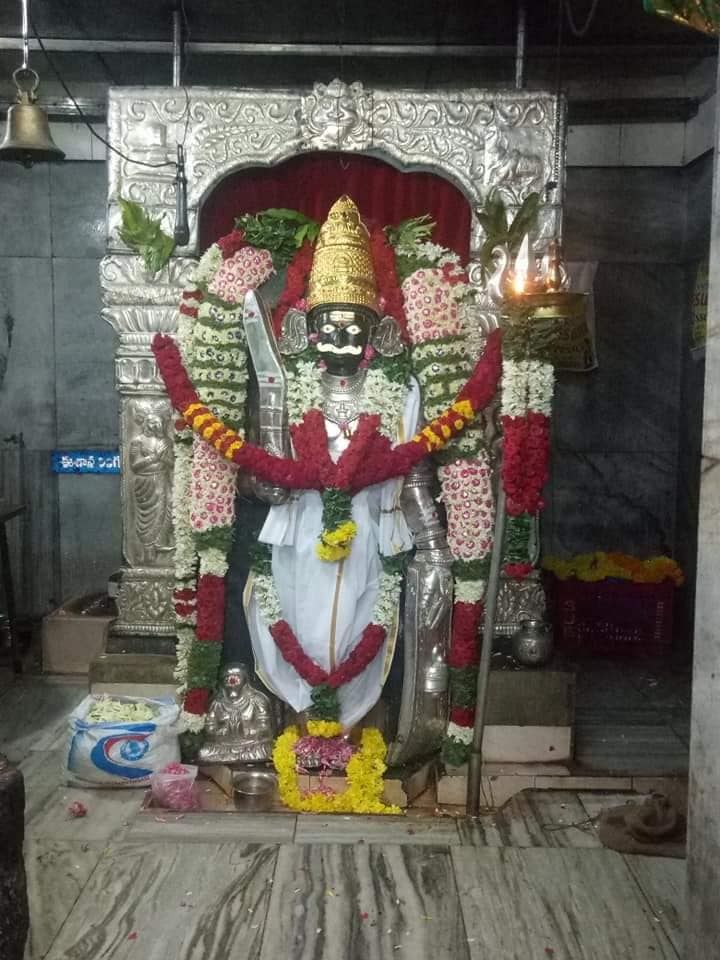 Mahashiva ratri performing biggest festival in february to march. Brahmostavam is celebrated for 11days very grand mannger. On end day of brahmostavam or eighth day of pooja, 365 measures of rice is cooked with pumpkins and other ingredients as athirasam and roots and it is shaped like a hill. After performing pooja, the rice spilled throughout using wth sword of lord veerabhadra violently to symbolize veerabhadra’s destruction of Yaksha’s yagasala. cooked rice will be served as prasadam to all devotees. 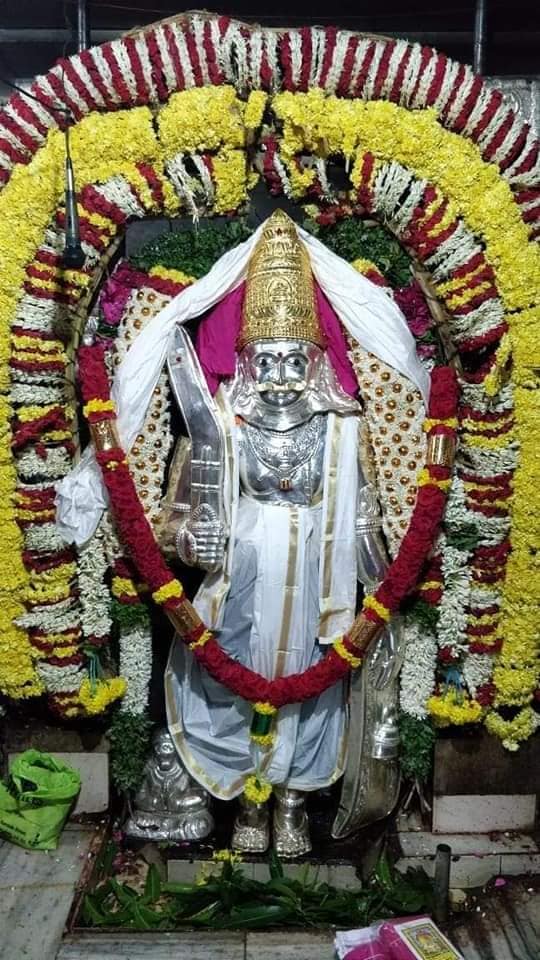