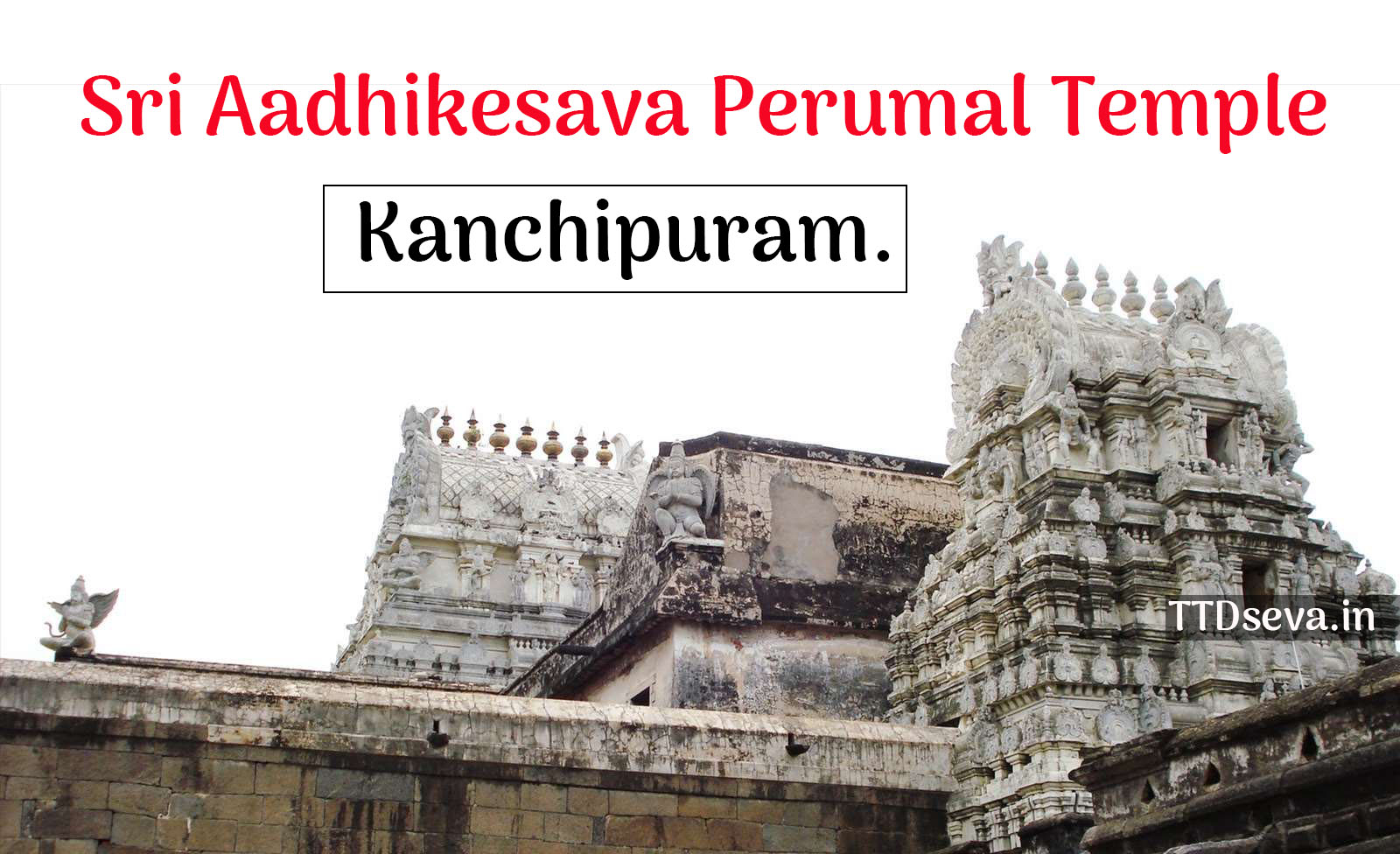 ABOUT THE TEMPLE AND LOCATION

This temple is situated in Tirunelveli district in Tamilnadu. 1.5kms away from Sri vaikundam railway lane, this sthalam is found in Kanchipuram (china or little kanchipuram) and is situated about 2kms from Sri varadharajar Temple. Bus facility is also available from kanchipuram. It is very close to Sri Yathokthakaari Temple.

The Perumal in this sthalam is Sri Aadhikesava Perumal and he is seen with eight hands. He holds Chakram, sword, a Flower and an Arrow on the four right hands and Sanku, Bow, kedayam (which is used to protect while fighting using a sword) and Mace (which can be found with Hanuman and Bhima).

The sthalapuranam of this temple is also associated with that of Saraswathi and Lord Brahma. After all the demons were killed by Sriman Narayana, who was sent by Saraswathi to destroy the yagam done by Brahmadeva, she finally sent a ferocious Sarpham (snake). Sriman Narayana to kill the dangerous snake took the form of Ashtabhuja Perumal holding eight different weapons to kill the dangerous snake. And using all those eight weapons, he killed the snake sent by Saraswathi. The snake is found on the Vaayu end of the Yaaga sala as “Sarabeswaran” in this temple.

When coming across the sculpture found in the sthalam, we can see that Thondaiman Chakravarthy who is popularly named as Vayiramoghan built this temple.

The Lord here has eight hands in which he holds eight different weapons.

The Moolavar of this Sthalam is Sri Aadikesava Perumal. Other names are Gajendravaradhan, Chakra-thaarar. Moolavar in the sanctum is in standing pose facing West direction. Prathyaksham for Gajendra, an Elephant of the Bhagavatha lore. It is believed that only in this Sthalam, Gajendra Moksham happened.

Once there was a king by name Indra Dyumnan who ruled Pandya kingdom. He was astaunch hya rdevotee of Lord Vishnu. One day he was in deep meditation. At that time Agasthya Rishi with his disciples came to visit him and bless him. But Indra Dyumnan who was in deep meditation failed to receive him and his disciples, as honored guests to his palace. It is the custom and duty on our part to receive our guests who come to see us with great respect and affection. Agasthya rishi had already told his disciples about the good qualities and guru bakthi of the king. He was very proud to have the king as one of his followers. Moreover Agasthya Rishi had informed his syshyas about the grand reception he is going to receive from the king. Agasthya with his disciples entered the main hall of the palace were the king was sitting and praying. But as expected, the king did not move from his sitting posture. This made the Rishi very angry. He could not tolerate the indifferent treatment and the humiliation shown to him in the presence of disciples. He could not control his angry. As a result of the behavior of the king, Agasthya Rishi cursed the king to become an elephant. Normally elephants are famous for their ego. So Aghasthya felt it proper that curse to become an elephant was very appropriate.

The king not knowing what had happened became an elephant with a very strong body. The wild animals like lion were afraid of this elephant because of his shape. But small innocent animals were happy and fearless in the company of Gajendra(as he was known). Having taken the entire forest under his control and lived in the forest with his family consisting of number of other elephants.

Once there was acute shortage of water in forest. Gajendra and his family wandered here and there for water and finally they found out one pond surrounded by beautiful garden and huge trees. Gajendra did not wait; he went down the pond and started drinking water. The other elephants also joined him. They played in the pond by spraying water with their trunk on each other and spent the time as they liked.

Suddenly, Gajendra started feeling somebody grabbing his leg under the water and pulling his leg towards deep. He, being very strong and bold did not mind it and shook his leg with force, but he could not free himself. A very big crocodile had caught his leg. He did not mind it. He was sure that this crocodile is northing before his strength and could easily come out of his grip. The more he tried to come out the more was the strength of the crocodile. His relatives and children seeing his condition joined together and pulled Gajendra towards back and they failed in their attempt. This situation continued for long time. Years passed the other elephants could not continue to help, as they were hungry. They finally gave up the efforts and went away leaving Gajendra to face his fate. Gajendra had no food at all. He was starving for many days. He became weak tired of the fight with the crocodile for a long time. Thus the fight lasted for thousand years. Tears dripped from eyes. He who believed his relatives would help now realized that could not save him from this dangerous situation.

One day it struck to Gajendra that he was a king who was a devotee of Lord Vishnu. Now he realized that he, given up by the friends and relatives, has become alone struggled. At this moment he was almost under deep water and his trunk alone could be seen above the water level. He was sinking. Gajendra started to worship Lord Vishnu with an earnest appeal to save him from the crocodile.

Lord could hear the voice clearly and suddenly without waiting for anything rushed to save Gajendhra. At first Vishnu releases his chakra and kills the crocodile who was a Gandharva in his previous birth. From the body of crocodile one Gandharva appears with folded hands and he bows Vishnu for granting sapa-vimochanam for him. As the crocodile caught the leg of a Vishnu Bhaktha (Gajendra) he was given first preference for Moksha… So important is the Vishnu Bhakthas’ holy foot. Then Vishnu lends his hand to Gajendra and lifts him up. Suddenly Gajendra’s elephant body disappears and he takes form of Vishnu. Thus ha attains “Sarupya Moksha” because of his Krishna Bhakthi.

Those who recite Gajendra Sthuthy or remember Gajendra in the Brahma Muhoortham will attain Moksha. Vishnu himself has told the Phala shruthi for such slokas.  That is a specialty for this. You may have a question to ask, who is this Gandharva who came in the form of a crocodile?

This Gandharva is known as Hoo…. Hooo… One day he was taking bath in a pond with some Apsaras. At that time one Rishi was performing Sandya Vandanam in the pond. This Gandharva, having seen this Rishi on the other side of the pond, wanted to make fun of him. He just went under the water and reached the Rishi. The Gandharva pulled the rishi’s leg like a crocodile. The Rishi felt this and thought that the Gandharva was acting like a crocodile. Hence the Rishi cursed him to become a crocodile in view of his mischievous deed. Gandharva realizing his foolish action pleaded for Shapa Vimochanam. The Rishi felt for him but he could not withdraw the curse. He told him that he would attain his original body as soon as he catches the leg of a true Krishna Bhaktha.

This story teaches us that we should always show respect to our elders and honor them. We should bow before them and take their advices with Bhakthi. Such good manners will make them happy and in turn they will bless us with all fortune. If we fail in this, we may also be subjected to hardships like Gajendhra and suffer like him. We should also remember that making fun of great people would also will land us in trouble like Gandharva who became a crocodile.