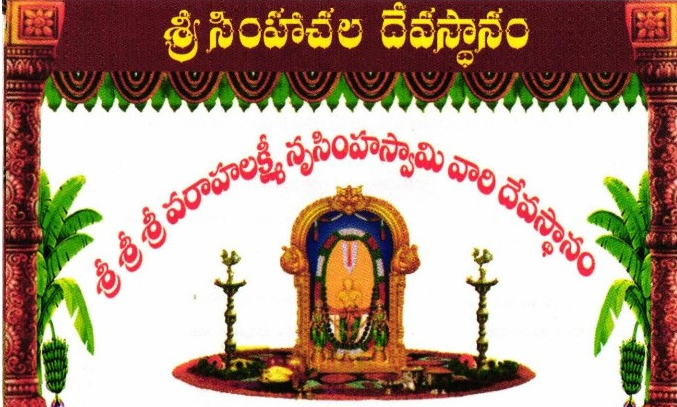 Simhadri Or Simhachalam is A Hindu Temple Located In The Visakhapatnam City Suburb Of Simhachalam In Andhra Pradesh, South India. It Is Dedicated To Narasimha (The Man-Lion), An Incarnation (Avatar) Of Vishnu. The Architectural Style Of The Central Shrine Is Kalinga. The Simhachalam Temple Faces West. According To Religious Belief, An East-Facing Entrance Brings Prosperity, While A West-Facing One Brings Victory. very auspicious places. Simhachalam Temple is a hilltop temple situated in Vishakhapatnam (Vizag) in Andhra Pradesh. The Sanskrit translation of “Simha” is a lion and “Achala” is a hill, hence the name Simhachalam. “Simha” In Odia Means Lion; “Adri” Or “Anchala” In Odia Means Hill.

The Temple Is Located At The Top Of A Hill; Hence The Temple Is Called Simhachalam. It is dedicated to Narasimha (the man-lion), an incarnation (avatar) of Vishnu. The architectural style of the central shrine Kalinga architecture. Sri Varahalakshmi Narasimha Swamy, The Lion-Man Incarnation Of Lord Vishnu, Is The Presiding Deity Of The Temple. The Temple Is One Of The Eighteen “Narasimha Kshetras”, The Shrines Of Lord Narasimha, In India. The temple has the most exquisite stone carved 16-pillared Natya mandapa and the 96-pillared Kalyana mandapa. It is dedicated to Narasimha, an incarnation of Vishnu and is beautifully adorned with really intricate carvings. Simhachalam temple is situated 16 km from Visakhapatnam (Vizag) city among thickly wooded hills on the Simhachalam Konda. The beautifully-carved 16-pillared Natya mantapa and the 96-pillared Kalyana mantapa bear testimony to the architectural brilliance of the temple.

➘ Visakhapatnam Airport to Simhachalam
(about 13.5 km, via NAD Junction)

➘ Visakhapatnam RTC Complex to Simhachalam
(about 21.5 Km, via NAD Junction or 20 Km. via Hanumanthawaka Junction)

➘ Visakhapatnam Railway Stations to Simhachalam
(about 19 Km, via NAD Junction or 22 km. via Hanumanthawaka Junction)

Simhachalam temple opening timings and special darshan tickets details are available here. Devotees of Sri Varaha Lakshmi Narasimha swamy are allowed for Sarva darshanam from morning 6.30 AM to 9 PM. The timings are mentioned below, but these timings may change during some special days.

Simhalchalam Temple is an architectural marvel and deserves high praise. Simhalchalam Temple has a high tower surmounting a square shrine and a 16 pillared mandap. There is a portico in the front with a smaller tower above it along with a veranda, where a stone care structure rests with stone wheels and horses carved in stone. The structure is made of dark granite, which is intricately carved with conventional and floral ornament and scenes from the Vaishnavite puranas. One of the pillars is called the kappa stambham or ‘tribute pillar’. It is believed that the pillar has healing powers and cures infertility.

It comes on “Aashada Pournami” generally at June/July month. On this day the people walk around the Simhachalam hill which was in distance 34 kms. On the full moon day in the month of ‘Aashada’, June, the devotees of the Lord, hailing mainly from the countryside, observe a fast on this day and go around the hill over a distance of about twenty miles. They eat their dinner after completing the Pradakshina and after having ‘Darshan’ of the Lord. Those, who cannot undertake this, satisfy themselves by making 108 rounds in the temple itself.

An inscription dated as far back as 1098 AD of the Chola King Kuloththunga provides some clue as to its antiquity. Another inscription shows a Queen of the Eastern Ganga of Kalinga (ancient Orissa) (1137-56 AD) covering the image with gold while a third inscription says the eastern Ganga King of Orissa, Narasimha Deva, built the main/central shrine in 1267 A.D. With more than 252 inscriptions in Oriya and Telugu describing the antecedents of the temple, it is a historically important monument.

Hiranyakasipu, who thought that the entire world should chant his name as the chief deity and if anyone chants other than his name should be sentenced to death. This was the major order that was proposed by him. Because of fear, all the people started to chant Hiranyakasipu’s name and dedicated poojas towards him instead of doing it to Sriman Narayanan. But, bhaktan Prahaladan, the blessed child of Sriman Narayanan and the real son of Hiranyakasipu, did not chant his father Hiranyakasipu’s name but always expressed his bhakti towards Sri Vishnu. Though his father warned him that he should only follow him as the main deity but not Sriman Narayanan, he didn’t follow and instead he started to follow him very deeply.

In normal days darshan may complete within one hour time but During weekends, Holidays, special days, Ekadasi time crowd will be more. During Break time or After 9 pm, entry to Q line for darshan will be stopped, but devotees who are already in the Q line will be permitted for darshanam.

Kappasthambam is a pillar in the main temple. It is believed that the wishs of those devotees who embrace the pillar with a pure mind will be fulfilled. It has an in built Santhanagopala Yantram, which is believed to be empowered to fulfill the wishes of devotees. It is believed that childless couples will get children by embracing this pillar.

Road: Simhachalam Can Be Accessed By Road From Simhachalam Bus Depot By APSRTC City Buses, Which Is 4.4 Kilometers, Or By Simhachalam Temple Bus Service. APSRTC Operates Frequent Buses From Dwaraka RTC Complex In Visakhapatnam City Which Is 19.9 Kilometers To Simhachalam temple.

The annual Simhachalam Chandanotsavam 2018 of Lord Sri ‘Varaha Narasimha Swamy’ at Simhachalam Temple held on Akashya Trutiya day (Vaisakha Suddha Tadiya) on 07 th May 2019, Tuesday. Lakhs of Devotees visit swamy nijaroopa darshanam on that day with a strong belief that their wishes are fulfilled. It is also called Nijaroopa Darshanam, Vaisakha Sudda Tadiya (Akshayaturitya) Usually comes in the month of April/May. On this day more than one lakh people will have darshan of lord Narasimha from early morning. Only on this day swamy gives darshan without chandanam layer on his body i.e., Nijaroopa Darshanam every year.

Lakhs of people visit on this auspicious day from various parts of north Andhra, Odisha, Andhra Pradesh, Telangana, Orissa, Karnataka and Tamil Nadu. Chandanotsavam would be held at 2 am on 7th May 2019 and free darshan will start from the early hours beginning 4 am. Ticket booking online available checknow. Simhachalam temple chandanotsavam tickets booking onlinecontact information in working hours.

TEPPOTSAVAM
Will be celebrated on Pushya Bahula Amavasya. On this day ‘Utsava idols’ are taken to ‘Varaha Pushkarini’ from the temple in a palanquin. The procession that began on the Simhachalam hill at 3 p.m. reached the foothill around 4.30 p.m. People gathered in good numbers alongside the streets to have a darshan of the Lord.

Nityannadanam Scheme is introduced by Dharmakartha, Dr. P.V.G.Raju Garu on in the year 1989. Since then, 1500-2000 devotees are served Annaprasadam everyday.

Those who wish to pay in cash can make the payment across cash counter at Annadana Sadanam and Temple premises.

Recently the number was increased to 5000 devotees per day.

IT Exemption: Individuals, firms, companies etc. can make donations, and they are eligible for exemption of Income Tax U/s 80(G).