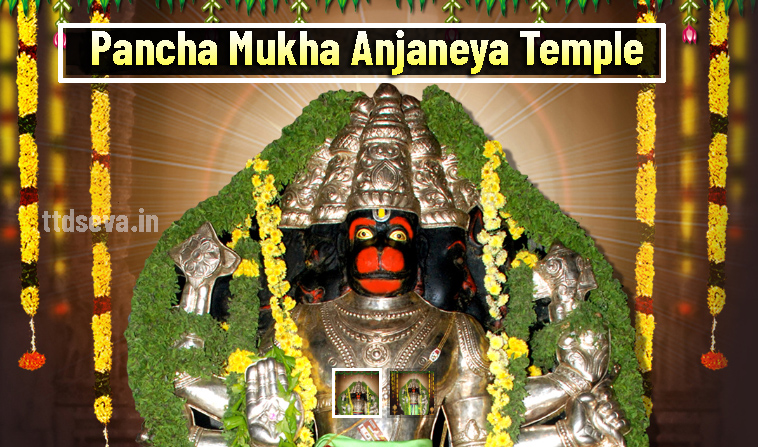 Pancha Mukha Anjaneya Temple Sthalam, Navavur Perivu. Panchamukha Anjaneya Temple is situated in the kongu region of western Ghats. Tamilnadu has unique temple of its kind among the temples construction in the 21st century in India. The uniqueness of this Holy temple could be witnessed and experienced through the construction of sanctum and sanatorium of the Deities installed for puja and work ship as detailed under

As pre the Divine Dream message of Lord Hanuman given to his upasakar Hanuman Dasan in the Early Years of 1990/91cas this divine Desire, the temple complex present location and Panchamukha for the lord hanuman were divinely conceived, temple construction activities initiated and finally the holy Panchamukha Anjaneyar grand shirpa statue pradhistaid along with Erattai Pillaiyar with respective Sannidhis. The temple kumbhabhishekam rituals performed on the 1st of June 1990 in a grand style by this Trust.

Deities of Temple
Panchamukha Anjaneyar Temple is situated in the kongu region of western Ghats. Tamilnadu has unique temple of its kind among the temples construction in the 21st century in India. The uniqueness of this Holy temple could be witnessed and experienced through the construction of sanctum and sanatorium of the Deities installed for puja and work ship as detailed under Erattai Pillaiyar Panchamukha Anjaneyar Pratyangara Devi with Sri Vaishnavi, Sri Varahi, Navagrahas with their Conserts .

The main deity of this temple Sri Panchamukha Anjaneyar has been installed and Pradhistai in this Sannidhi with beautiful sanctum and sanatorium. The main deity installed is a black stone shirpa statue having height of 11 feet with Abhayahastha Mudhra of the Right Hand and Left Hand resting on the Gadha Ayutha along with the Panchamukha’s Sri Varagar; Sri Narasimhar; Sri Hayagrevar; Sri Garudar and Sri Hanuman in the standing posture

The Panchamukhas of the main deity symbolize and depict the Anugraha Blessing characteristics of wealth, health, shelter and prosperity for all worship Devotees Holy Abhishegam, Tirumanchanam and Grand Pooja are conducted during the dawn of moolam Natchattram every month in addition to routine daily pooja to the lord hanuman.

This is a pancha loga shirpa idol of Panchamukha Anjaneyar having the same replica of the main deity kept near the moolavar statue. This idol is 4 feet tall with idol weight close to 1000kgs

Maha Pratyangara Devi stone shirpa statue is installed and Pradhistaid in this exclusive sanctum and sanatorium along with Sri Vaishnavi and Sri Varahi as per the Divine desire of Panchamukha Anjaneyar in the year 2007.

The Maha Pratyangara Devi black stone shirpa statue has got unique divine feature having Veda swaroopa mode and posture along with Abhayam, Vara prasadha Mudras of the right and left hasthams in addition to the holding of damarugam and paasam in the other two back hasthams of the deity. This statue beautifully sculptured in the black stone is 9feet tall with mata Devi setting on the simha vahan the sanctum and sanatorium of the Maha Pratyangara is guarded by her lieutenant aides Sri Maha Vaishnavi and Sri Maha Varahi.

On the outer wall sides of the Maha Pratyangara Devi sanctum and sanatorium all the Navagraha Bhagavans along with their respective concerts in the sitting posture are Pradhistaid in an archival manner. This design of the Navagraha Pradhistaid symbolizes that all the navagrahas are under her control and diction. This grand Bhava of Maha Pratyangara Devi in this sannadhi shows that she will eradicate and erase all dhoshams of navagrahas.

Abhishegam and poojas are conducted on every full moon day in addition to daily routine poojas to the goddess. Special pooja rituals are also conducted during all astamis and new moon days to the Devi also using red chilies.