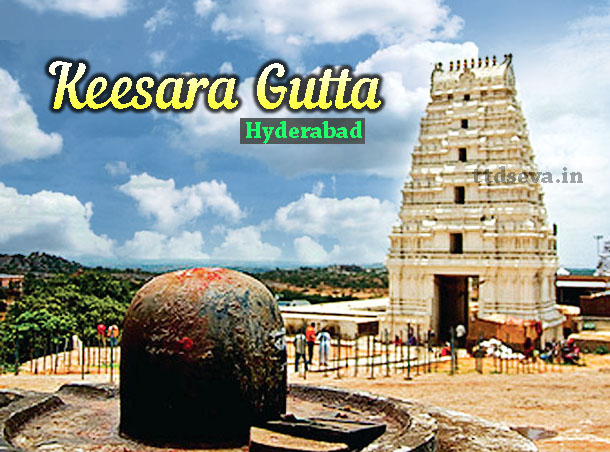 It is a historic one of famous temple village and was once the capital of the great Vishnukundin dynasty. Very near the best place for Hyderabad people. It is to be believed that the temple is 1600 years old and Sri Bhavani and Sri Shiva Durga are also present to either side of Lord Ramalingeshwara. on this temple, Shivaratri is performed on a grand scale here and every year lakhs of devotees from all over the state visit this shrine.

It is said that Lord Hanuman is said to have manifested 101 lingas here but none of them have been favored by Sri Rama as Lord Shiva himself have transformed to a Linga for Lord Rama to worship him, thus Lord Rama is said to have given a boon that devotees who pray to these 101 lingas will attain salvation.

Keesara gutta Temple is located in the Keesara village. Also called Ramalingeshwara Swamy Temple, it is dedicated to Lord Shiva and his companions Bhavani and Siva Durga. Situated on the top of a hill in the Rangareddy district, this temple attracts a huge number of devotees every day. Also known for its architectural importance, this temple is an ideal place to visit for a weekend trip from Hyderabad.

In Tretayuga Sri Ram along with his consort Seeta Devi and Hanuman while roving in the area leisurely met several Maha Rishis. They advised Sri Ram to consecrate a Siva Lingam to get rid off his sin killing Ravana who was a Brahmin and a great devotee of Lord Siva.

They also fixed an auspicious time for installation of Siva Lingam. Hanuman set out to bring a Siva Lingam, Lord Siva then, manifested before Hanuman in the form of 101 Lingas for the performance of pooja by Sri Ram but not before the auspicious time. Sri Ram was, therefore, constrained to pray Lord Siva and Lord Siva transfigured as Siva Linga and manifested before Sri Ram. Sri Ram consecrated the above Siva Lingam in the accompaniment of Sri Seeta. Hanuman felt unhappy as the 101 Lingams brought by him found no favor with Sri Ram.

He lost his calmness and darted them away. Sri Ram pacified Hanuman and gave a boon that the devotees who pray 101 Siva Lingas brought by Hanuman would attain salvation. MahaShivaratri, Shiva Kalyanam, Sri Rama Navami, Hanuman Jayanthi, Ramalingeshwara Brahmotsavam and festivals and auspicious days of the Karthik month (Karthika Masam) and Magh month (Magha maasam) are the important festivals celebrated here. Know more Importance of Keesara gutta Temple. Shivaratri Brahmostavam is performed on a very large scale when lakhs of devotees visit the temple from all the corners of the State and seek the blessings of Lord Siva.

How to reach Keesara Gutta

The APSRTC Hyderabad region is operating 154 special buses to Keesaragutta from different areas in the twin cities and suburbs for Sivaratri festival.

As per traditional knowledge, one who prays these 101 Shivalingas would get blessings of all 330 million gods. there’s also a large sculpture of Lord Hanuman near Keesara Gutta Temple.

The temple is visited by pilgrims during the auspicious days of Karthik and Magha months. There is a museum near Keesara Ramalingeshwara Swamy Temple, wherever various articles excavated from the region is exhibited. The festivals conducted at Keesara Gutta Temple are Maha Shivaratri, Shiva Kalyanam, Sri Ramanavami, Hanuman Jayanthi and Ramalingeshwara Brahmotsavam.

When we enter in dwajasthambam is seen and inside we see Bhavani matha in separate sanctum and as we procced further we see Anjaneyar with Siva linga in front. Ganapathy, Lord Subramanya with Valli Devanay,are seen to the sides of main door of Main sanctum. Inside the main sanctum, Siva Lingam known as Ramaligeswar is seen with a sculpture of Siva at the back of Lingam. As we come out there is a small sanctum Durga matha is seen.

Outside the Siva temple there is Sthala Vruksham with Naga Devatha under it. Now we come to another hall like thing with Dwajasthambam in front. Here we see Lakshmi Narashimar and opposite of the sanctum Garudazwar is seen. Then we see Siva panchayadhana murthy, with Nandi in the front. Finally we see Sita, Rama and Lakshmana and Hanuman facing them in the front in a small sanctum.

There are sculptures of Maha kali, Maha Saraswathy and MahaLakshmi, are also in the same hall. At a distance we see Hanuman in separate sanctum and near by there is huge Hanuman on a platform. Purana says when Hanuman was flying with Sanjeevi Parvatham pieces of it fell down in this place which turned out to be Siva Lingam. That is the reason we find of Lot of Siva lingam in this place.Its a hear say that are 108 Lingams in number over here.

Keesara has a great cultural backdrop as this place has several number of ruined shrines in the Guptas architecture dated of the fifth century. The presiding Deity, Ramalingeswara Swamys temple was ruined and renovated recently. We can see a giant Hanuman idol near the temple. We can also see the results of excavations held here, in the Museum.

In threthayuga Lord Sri Ram along with his wife Sita and Lord Hanuman were searching a means to get rid of Ramas sin (Brahmana Hatya Paapam) – killing the demon Ravanasura who is a brahmin and a great devotee of Lord Parameshwara. Lord Rama met some great Saints and Sages in Gatika (Keesara) who advised him to consecrate a Shiva Lingam.

The history of Keesara goes back to early Christian era. In fact it is the oldest inhabited place of Hyderabad city. The history of Hyderabad starts from the history of Keesara. Keesara was once the capital city of Vishnukundins dynasty. The ruins of old fort can be seen on the hill the name literally translates to “The temple of a core lingams situated on the hillock of Lord Hanuman”. Lord Sri Ram requested Hanuman to bring a Shiva Lingam. By Hanumans kind request and worship, Lord Siva manifested before him in the form of 101 Sivlings. But, it was too late as it was not an auspicious time. Then, Lord Rama prayed to Lord Siva and Lord Shiva manifested as Sivalinga Before Sri Ram.

Sri Ram and Seeta consecrated tha Shiva Linga and prayed to the Lord with utmost devotion to remove their sin. But, Lord Hanuman was unhappy and lost his nigraha (calmness) and darted away those 101 shivlingas. By understanding the anger of Hanuman, Lord Sri Ram gave a boon to Hanuman that who prays 101 Shivalingas, darted by Hanuman, would get blessings of all 33 crores Devatas (Gods).

The popular temple of Shiva and lingas, Keesaragutta Temple is located here. There is also Laxmi Narasimha Temple built during the time of the Qutub Shahi period. There is Sri Ramalingeshwara temple here on a hillock and the Veda Pathasala run by Tirumala Tirupati Devasthanams.

Other Near by visiting places:

101 Shiva Lingams: Among these Shiva lingas, some are of upto 1 meter. Several legends say that these lingas indicate the life and fertility. The lingas have a base structure which represents the womb.

The name literally translates to “The temple of a crore lingams situated on the hillock of Lord Hanuman.” The village is in Ranga Reddy district of Andhra Pradesh and is located about 18 km from ECIL X roads on the outskirts of Hyderabad (and about 45 km from Begumpet airport).

The temple is a mere 1.5 hour -2 hour drive from the city. When we were traveling, it was raining and the drive was very pleasant. Legend has it that when Lord Rama wanted to atone for the sin of killing a great devotee of Lord Shiva like Ravana, he asked Lord Hanuman to bring a shiva linga carved from the rocks of mount Kailas itself. But since Hanuman could not bring the lingam back in time for the auspicious moment of the propitiation, One of the several lingams that can be seen scattered on the hillock of Keesaragutta.

Lord Rama made one out the sands and performed the pooja. Frustrated, Lord Hanuman hurled the lingam he had brought from Kailas with all his might and it fragmented into ten million (a crore) smaller lingams that scattered on this hillock. These can be seen even today on the hillock.

How to Reach temple You can reach the temple by traveling on regular APSRTC buses or just hire a cab to take you there. On a normal day, the trip to and from the temple will take about 5 hours. On a festival day, it takes considerably longer at the temple.