Sita Ramachandraswamy temple, Bhadrachalam Lord Sree Sita Ramachandra Swamy Temple in Bhadrachalam is a Hindu temple of Lord Rama located in Telangana, India. Badrachalam Temple, timings Bus route information. Seetha Rama Kalyanam, Kalyanostavam dates. Srirama Navami Festival at Bhadrachalam has celebrated on Sri Rama’s birthday very grand manner. The ten days of this Srirama Navami festival attract lakhs of devotees from all corners of India. On this occasion, all ‘Rambhaktas’ gather in this place to worship their Lord Rama. The festivities start from ‘Chaitra Sudha Saptami’ and continues till ‘Bahula Padyami’. Celebrated a very grand manner. The focal point of the celebration of the Festival of Srirama Navami is the Kalyanotsavam. 2019 Kalyanam dates Live also available.

Sri Ramula Vari Bhadrachalam is a key town of Pilgrimage importance located in the Khammam District of Telangana.very traditional place in Telangana state. The temple town of Bhadrachalam is situated on the banks of Godavari River. as well as It was part of East Godavari District, Andhra Pradesh till 1959. Telangana and Andhra Pradesh devotees visited regularly. The town is synonymous for its famous temple devoted to Lord Rama.

The Srirama Navami 9-Days Festival is celebrated in Bhadrachalam of the Khammam District in Telangana. To enjoy the colors of this festivals, Holyness you must visit Bhadrachalam during the months of March and April days. The unique feature of this celebration is that it is being held here continuously for four hundred years of history. This is one of the most popular Temple Fairs of the state. Bhadrachalam Revenue division is considered one of the largest revenue divisions in the country, which was transferred to Khammam district of Telangana region for administrative purposes.

According to history, Paleolithic man had roamed the Lower Godavari areas includes Bhadrachalam and its surroundings. Bhadrachalam town has a clearly documented history of Lord Sri Rama temple, Very authentic famous place, which was constructed in the 17th Century CE. According to Mythology, the present town was once part of the Dandakaranya forest, which Lord Sri Rama, Sita, and Lakshmana had visited during their exile also called vanavasam according to local parlance.

Badrachalam Khammam district newly carved Telangana state. The jungle which is now in the vicinity of the temple was the place for Rama’s retreat and a place called Parnasala which is 32 km away was the location where Rama had built a dwelling for himself and Sita. rests his Vanavasam at Parnashala. It was here that Sita was abducted by Lanka ruler, Ravana. As per Puranas, town shares its historical significance with Ramayana Era. The name Bhadrachalam is derived from the word Bhadragiri (The Mountain Abode of Bhadra, the child of Meru and Menaka). A place located on the bank of river Godavari.

The famous temple at Bhadrachalam is home to the Archa Murthy’s of Rama, Sita and Lakshmana, and their idols are believed to be. Bhadrachalam in Khammam District of newly carved state of Telangana, Southern India has a documented history of Lord Sri Sita Ramachandra temple constructed circa 17th Century CE by Kancherla Gopanna (nearly 370 years ago), a great saint. Very popular place, Badrachalam located in the Telangana region of Andhra Pradesh. Badrachalam historical temple, dedicated to Sri Rama.

Badrchalam Parnasala is a Village situated in the Dummugudem mandal in the Khammam district of Telangana, India. The village is accessible by road and boats and is situated 32 km from the temple town of Bhadrachalam. 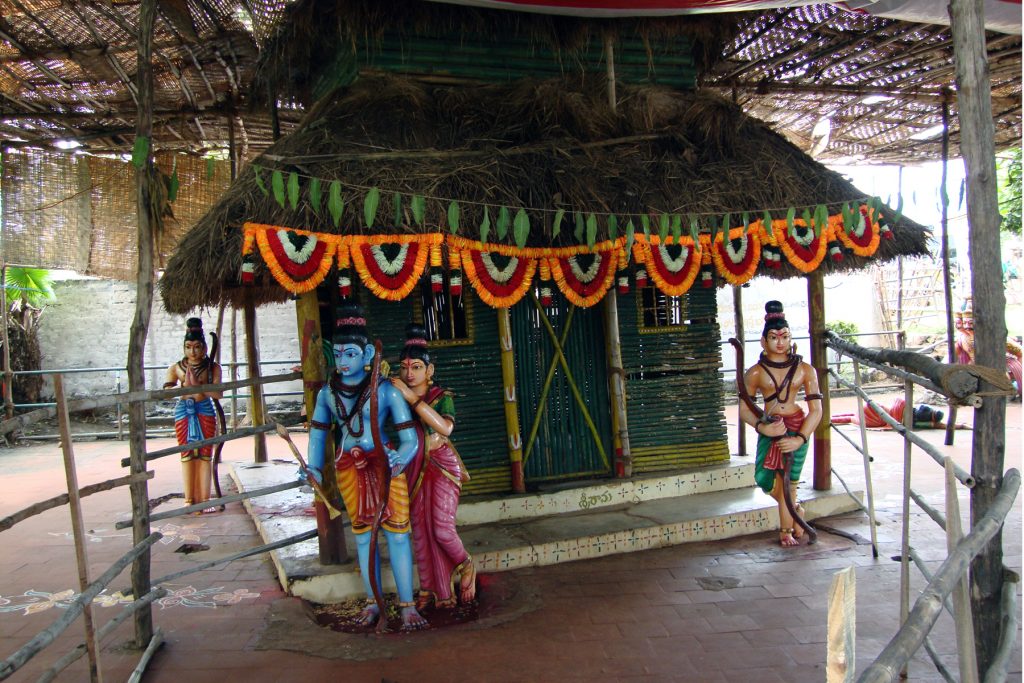 Bhadrachalam is being visited by thousands of people swayambhu i.e. self-manifested ones. Bhadrachalam is located in the Telangana region of Andhra Pradesh. The place is located on the bank of river Godavari. The shrine here is among the most important sites of Hindu pilgrimage in Telangana.

The Fairs in Andhra Pradesh are mostly of religious origin and have some legendary stories linked with them. puranas Hindu devotees followed many linked stories. Srirama Navami Festival at Bhadrachalam is no exception. This temple is closely connected to the life of the famous saint and composer Ramadasa. Sri Rama is also believed to have crossed the river Godavari, on his way Lanka to rescue Sita, at the spot where this temple stands.

Development, Hospitality. Subsequent to the construction of the road bridge on the Godavari at Bhadrachalam Temple place. it Foundation laid on 16.12.1959 by the then Chief Minister of A.P. Late Neelam Sanjeeva Reddy and inaugurated on 13.7.1965 by Dr. Sarvepalli Radhakrishnan the then President of India. The old way to connect the new route. The town has started developing in leaps and bounds and it has become a center of progress and developments for the surrounding tribal villages. became one of the best tourist places in Telangana state.

In addition to this, Badrachalam town is famous for the pilgrimage due to the temple presided by the deity Lord Sri Seetha Ramachandra Swamy. Lakhs of pilgrims visit the town for the humble devotion of their beloved God throughout the year in general and at the occasion of Mukkoti, Sri Rama Navami, Ganesh Nimarjanam, and Pushkarams in particular from different parts of the country. Sri Rama Pattabhishekam is performed once in sixty years. The splendid construction of the temple of Lord Sri Rama and Beauty of the Art and sculpture of Kalyanamandapam are note worthy.

Accommodation at Badrachalam temple. 8 big Kalyanamandapams, accommodation to pilgrims from the Devasthanam source are some of the infrastructural facilities available in Bhadrachalam temple area. Flood to the Godavari is a regular annual feature. Water enters the low lying areas at the first warning level itself.

Bhadrachalam is a census town in Khammam district, Telangana region of the Indian state of Andhra Pradesh. Bhadrachalam Temple, the Lord Rama temple, is a site of pilgrimage for Hindus. It is situated on the bank of the river Godavari (southern Ganges).

This town of pilgrimage is connected to other major towns by rail and by road. Connect Road by national highways.Train services available from Hyderabad. Bhadrachalam is about 120 km from district head quarters Khammam and 320 km from Hyderabad. The nearest Railway station is at 40Km Bhadrachalam road( Kothagudem ). Check various routes and Badrachalam Tour trips.

Papikondalu is the best tourist destination in Andhra Pradesh for nature lovers with green hills on both sides of river Godavari. Traveling to papikondalu on the river Godavari will give you best experience through out the journey. To experience nature & also night stay at papikondalu. Papikondalu is one of the tourist spots in Andhra Pradesh. Enjoy your holidays with your loved ones by planning papikondalu trip. This is the best season to see the nature beauty of papikondalu. So plan your journey today and book your tickets.

Follow us, If u have any questions please drop a comment below. stay tuned to TTD Seva Online services.