Ahobilam Temple Sitting posture in chakrasana facing east main temple Perumal lord shiva. Ahobilam located in Nallamala forest, near to Allagadda town in Kurnool district. This is the only place having 9 (nava)temples for lord Narasimha 9 Avataras. Kurnool district of Andhra Pradesh in the hills of the eastern ghats. Ahobilam, one among 108 Divyadesa Kshetras stands as pre-eminent as the place of the incarnation of Lord Vishnu as Narasimha in one of His Avatars. in addition to the nine shrines, there is a temple for Prahaladavarada Varadhan in the foothills of the mountain.

This is one of the popular pilgrimage centres in South India and is one among the 108 divya-deshams. It is also known as Thiru Singavel Kundram. many peoples from andhra pradesh, telangana and chennai visited daily. as per histroy lord narasimha form of the avathara by Garuda wished for vision. To fulfill his wish, the Lord settled in the hills around Ahobilam in the midst of dense forests in nine different forms. that is reason for calling as Garudadri, Garudachalam, and Garudasailam.

On his seven hoods lays TTD Tirupati, on stomach Ahobilam and on its tail lays Sri Shailam. The Brahmanda Purana states that Ahobilam was the dwelling of the demon king Hiranyakashipu who was killed by the Lord. Ahobilam is the place where the Lord killed Hiranyakasipu and saved Prahalada. Mahalakshmi took avathar as Senjulakshmi among the Senju, tribal hunters of the hills, and married the Lord. story behind Ahobilam name, means greatest cave. Garuda meditated on one of the mountains in the Nallamallai hills range for thousands of years. He worshipped the Lord with the selected verses and after having darshan of the Lord and having worshipped Him, Garuda considered himself blessed and thus this place came to be known as Ahobilam.

Sri Ahobila Muth, one of the most important Sri Vaishnava religious institutions in India. performed srirama navami, maha shivaratri performed special poojas all over 9 Temples. In fact, the utsava moorthy of the Malola Nrisimha temple, one of the nine shrines of Ahobilam, is the presiding deity of Sri Ahobila Mutham. Ahobilam is divided into Lower Ahobilam (Diguva Ahobilam) and Upper Ahobilam (Eguva Ahobilam). Upper Ahobilam is around ten kilometres from Lower Ahobilam.

Many devotees believe that the nine planets got their powers after worshipping these nine forms of the Lord and anyone who worships these nine forms can overcome the ill effect of the respective planet. The Eastern Ghats are likened to the great serpent Adhisesha (Mahaabhiseka) basking in the sun with its head at TTD Tirumala, its middle at Ahobilam and its tail- end portion at Srisailam – all the three with famous temples on them. The subject we have before us is Ahobilam. Of course, Thirupathi and Srisailam are also frequented pilgrimage centres. Ahobilam because of this special issue.

Before visiting these nine shrines, let us see how we approach the place. Situated in the Nallamalai Hills, Ahobilam is about 24 Kms. Every month on Swathi Nakshatram (star) Thirumanjanam (Abhishekam) is performed for all the nine Nrisimhas (Nava Nrisimhas) of Ahobilam.

This is the main temple in Lower Ahobilam. The principal deity is Lord Lakshmi Narasimha with His consort, Amirthavalli. Those who pray at this shrine with devotion would obtain the grace of the Lord and the Goddess. Around the main shrine there are also shrines for Lord Rama and Lord Balaji.

This temple has an excellent architecture of Vijayanagar style. The front Mantapam of Sri Prahladavasradan and Thayar, Andal Sannadhis contain beautiful stone pillars each displaying in sculptures an event at Ahobilam from the Narasimha Avatara to Chenchu Lakshmi marrying the Lord. 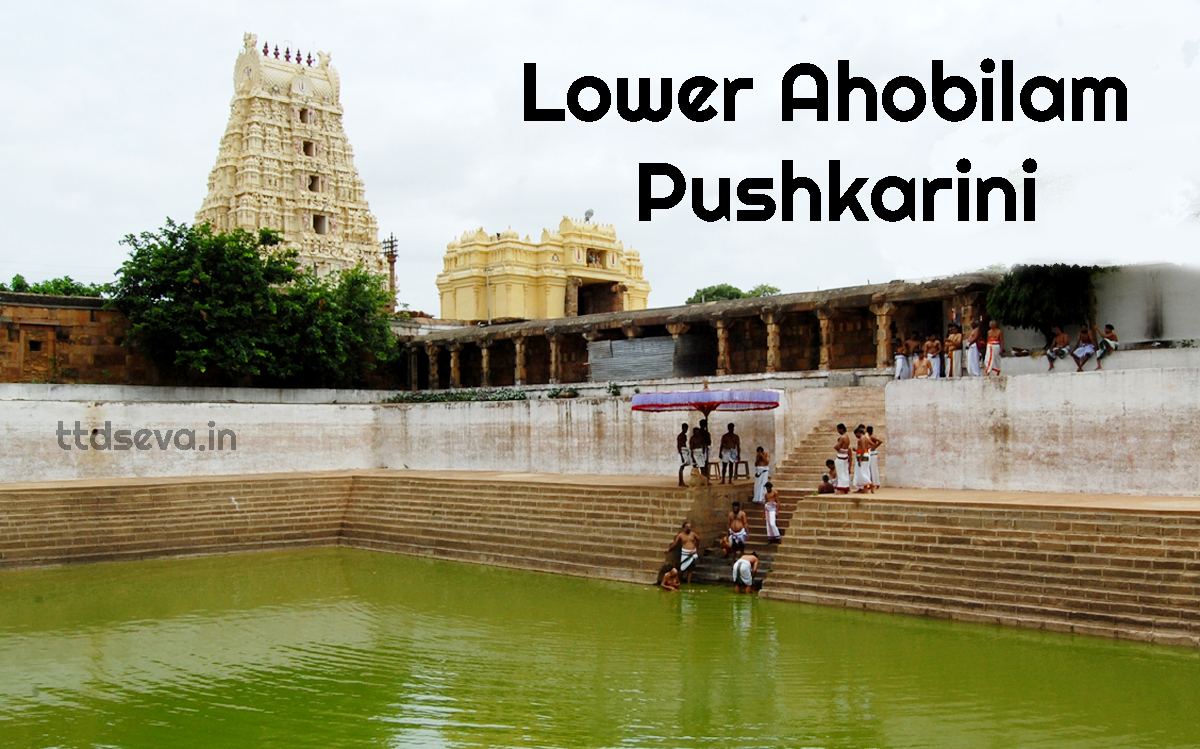 Many festivals are held here throughout the year. Swati festival which falls every month on the swati Nakshatram day (birth star of Lord Narasimhan) is a very popular in Sri Prahladavaradan Sannidhi apart from Sri Ahobila Narasimhan sannidhi in Upper Ahobilam. Brahmotsavam is held here with all fervour and festivities. Lord Prahladavaradan also goes on Paruvettai (visiting surrounding villages) for 40 days.

This shaligrama form of Ahobila Narasimha is fierce (Ugra) and is in the sukhasana pose. He is seen tearing apart the chest of Hiranyakashipu. In front of the Lord is Prahlada. The temple, situated on the Upper Ahobilam, at a distance of eight kilometres from the Lower Ahobilam. It is firmly believed the Lord Narasimha was ‘Svayambhu’ (self-manifest) here. 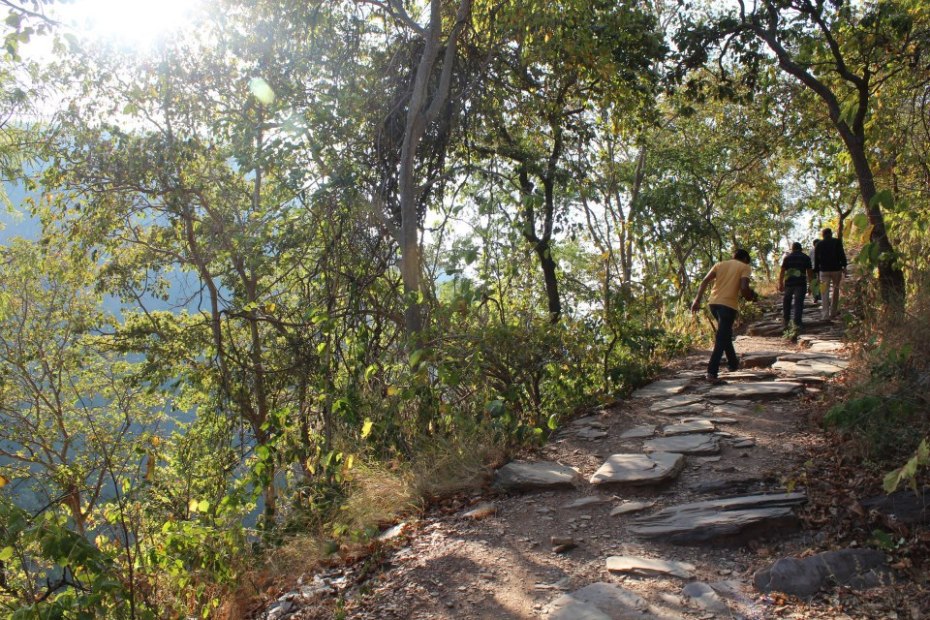 Sri Kroda Narasimha also glorified by devotees as Varaha Narasimha is a very special form of the Lord with the face of a boar. The temple of this Lord is one kilometre away from the main temple of Ahobila Nrisimha Swamy on the Upper Ahobilam. Along with Sri Kroda Narasimha, one can also have darshan of Sri Lakshmi Narasimha in this temple. Lord Narasimha is seen as though He is trying to gently pacify Lakshmidevi.

The word ‘Malola’ means beloved to Lakshmi (Ma=Lakshmi, Lola= beloved). It is said that the ‘utsavamoorthi’ of the Lord appeared to Srimath Adivan Satakopa Jeeyar, the first Jeeyar of Ahobila Mutt. The Supreme Lord Narasimha is the beloved of mother Lakshmi and hence is glorified as Malola Narasimha. This place is also known as Markonda Lakshmi Kshetra.. Nearly two kilometres from the main temple of Upper Ahobilam, is the famous shrine of Malola Narasimha Swamy. 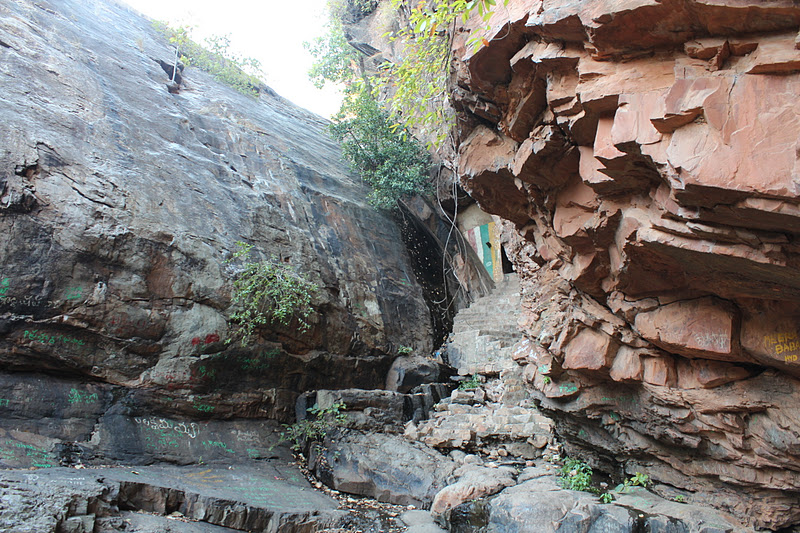 This temple is to the south-east of Lower Ahobilam at a distance of 2 kilometres. The popular legend is that after killing Hiranyakasipu, Lord Narasimha taught Prahlada several yogic postures. After killing Hiranyakashipu, Lord Narasimhadev here taught Prahlada few yogic postures to practice. This form of the Lord is seated in a padmasana with yogapatta around His legs. Once Lord Brahma visited this place when he was agitated and he returned after attaining peace by practicing devotion unto Lord Narasimha. 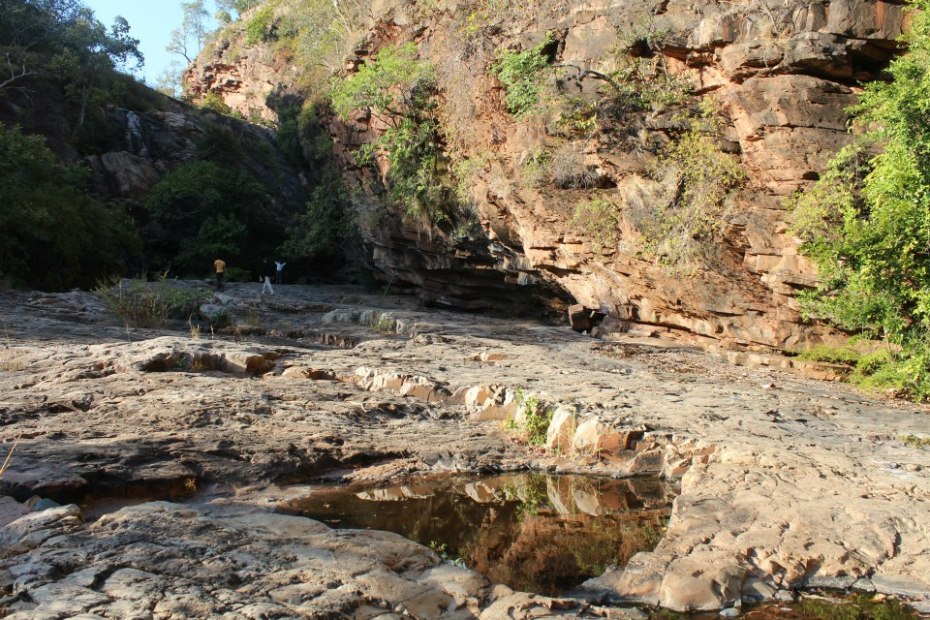 The Bhargava Narasimha Swamy is situated at a distance of two kilometres from the Lower Ahobilam, on a hill, near the sacred pond, known as ‘Bhargava Theertham’, where Bhargava Rama performed his penance. Hence the Lord of the temple is known as Bhargava Narasimha Swamy.This is one of the most ferocious forms of Lord Narasimha in Ahobilam. This temple is located on the banks of Akshaya Tirtha which is considered on par with the sacred Pushkara Tirtha. 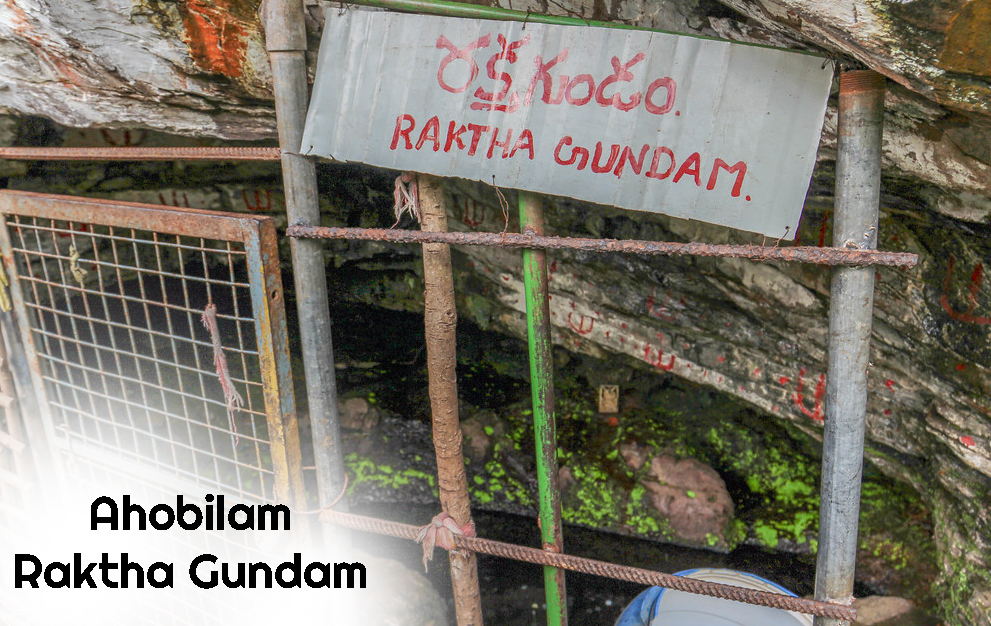 This shrine is situated at a distance of one kilometre from the Upper Ahobilam and one furlong from the road leading to Lower Ahobilam. The image of the deity is installed under a tree, called ‘Karanja Vruksham’. Hence this Lord is called Karanja Narasimha Swamy.Once Hanuman was performing austerities in Ahobilam and was continuously chanting the holy name of Lord Rama. Immediately Lord Narasimha appeared, between convo like
Narasimha: Yes you called me?
Hanuman: You are disturbing me. Please go away
Narasimha: I am Rama. Because you called Me, I have come.
Hanuman: How can you be Rama? You don’t have a form like that of Rama.
Lord Narasimha manifested Himself like Rama with bow in one hand and Sudarshana in the other hand. Hanuman got convinced and from then on started to worship the form of Sri Karanja Narasimha.

Important Points: King Krishnadeva Raya of Vijayanagar also said to have visited this Ahobilam temple on his return from the victory of Kalinga. He is also said to have made offerings of a diamond necklace, wristlet, a gold plate and gold coins here. 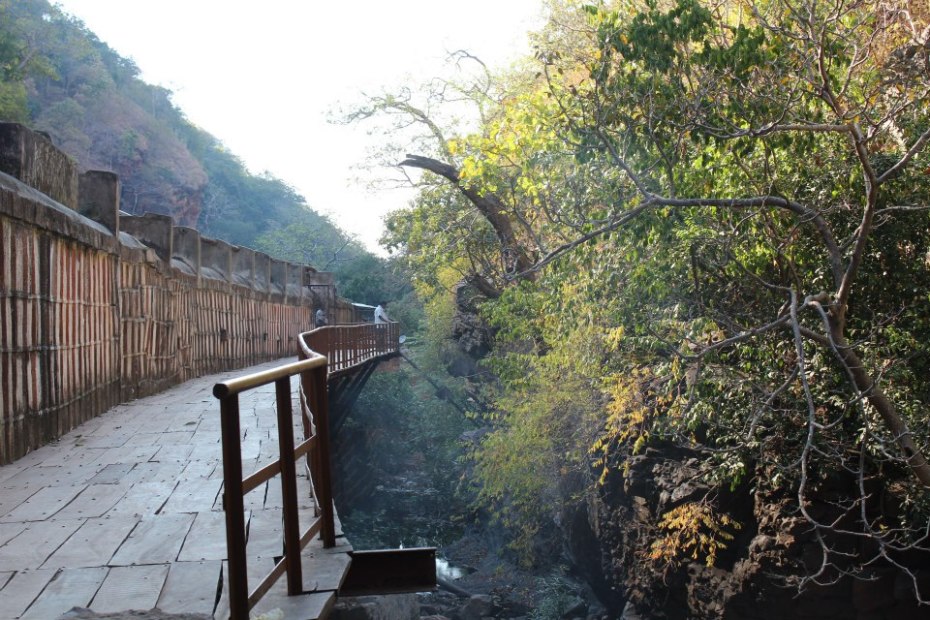 Booking of Arjitha sevas : Ubhayam amount can be paid by cash or Cheque favouring ‘Sri Lakshminarasimhaswami Devasthanams, Ahobilam’ and handed over to the Devasthanam Office and Receipts obtained. Cheuqes can also be deposited in/or money transferred to Account No. A/C NO: 002010011001555 – Andhra Bank, Ahobilam IFSC Code: ANDB0001862.

Immediately on deposit or money transfer, Devasthanam Office be advised by email or letter giving Ubhayadhr’s name and address with phone number, seva for which paid, date of seva etc.

The temples in upper Ahobilam and lower Ahobilam are opened from 7 am to 5 pm with a gap of lunch for an hour in the afternoon. Rainy season is the best time to visit because apart from the holy temples, you can enjoy the nature of the Nallamala forest at it’s best with greenary and waterfalls everywhere. Avoid summer because it is hard to trek as weather will be hot.

good accommodation on pilgrim tour is key to a great devotional experience. Sri Ahobila Mutt maintains a Guest House called Malola Guest House. There are a total of 14 rooms, 4 single rooms, 6 double rooms, and 4 triple rooms. The Haritha hotel’s restaurant also is an option. Of these, two double rooms and two triple rooms are air-conditioned. In addition, there are 10 dormitory type rooms. At this point we are unable to take online reservations. For reservations please call Badri Narayanan
PH:-08519-252045/252024 / 9490515284

400 Kms from Chennai, 363 km from Hyderabad, 320 Kms from Bangalore, 262 km. from Tirupati and 74 km from Nandyal (Kurnool dist).
flight: Hyderabad & Tirupati are the nearest airports.
Train: Nandyal town (74 km. on Guntur-Hubli line) and Cuddapah ( 118 km. on Madras-Bombay line) are the convenient railheads.
Bus: 24 km. from Allagadda, which is connected by state buses from Hyderabad, Tirupati, Chittoor, Cuddapah, Kurnool, Nellore and Chennai.

Hyderabad to Ahobilam
The distance between Hyderabad and Ahobilam is about 380 KM. By train, take Thungabadra Express from Hyderabad (Kacheguda) to Kurnool.